It is known as the world’s largest community kitchen — feeding freshly cooked food to an estimated 50,000 devotees on weekdays and over 100,000 on weekends and festivals. But the newly-introduced GST is going to put an extra burden of over Rs 10 crore on this socio-religious activity at the Golden Temple complex in Amritsar and other gurdwaras, temple officials say….reports Jaideep Sarin for Asian Lite News

With purchases made for the community kitchen coming under various slabs of the new GST, the Shiromani Gurdwara Parbandhak Committee (SGPC), the mini-parliament of the Sikh religion that manages Sikh shrines (gurdwaras) in Punjab, Haryana and Himachal Pradesh, including the Harmandir Sahib (popularly known as the Golden Temple), is expecting an additional burden of Rs 10 crore from this year.

Besides the Golden Temple, the SGPC runs the langar services in other famous Sikh shrines like Takht Keshgarh Sahib in Anandpur Sahib (where the modern day Khalsa Panth was established on April 13, 1699, by Guru Gobind Singh), Takht Damdama Sahib at Talwandi Sabo in Bathinda district and scores of other gurdwaras under it.

The “Langar Sewa” (community kitchen) is a socio-religious activity that is part of the Sikh religious ethos from the time of the first Sikh Guru, Nanak Dev (1469-1539). The langar was started to emphasise equality in society regardless of religion, caste, colour and creed.

With the new GST slabs likely to hit the SGPC ‘s purchases with an additional financial burden, Union Food Processing Minister Harsimrat Kaur Badal has written to Finance Minister Arun Jaitely to exempt all purchases made by SGPC for “langar sewa” from the GST Act.

“The Punjab government had earlier exempted all items purchased for langar by SGPC at Sri Darbar Sahib Amritsar, Sri Keshgarh Sahib Anandpur and Talwandi Sabo Bathinda from VAT. The SGPC spends around Rs 75 crore to purchase desi ghee, sugar and pulses. Now, it will have to bear a financial burden of Rs 10 crore on these purchases as they come under the 5 to 18 per cent GST bracket,” Badal pointed out.

SGPC president Kirpal Singh Badungar has also sent a communication to the GST Council, which decides on the tax structure and exemptions, to exempt the Sikh body from the GST slabs.

“Sri Harmandir Sahib runs the world’s largest mega kitchen, offering free meals throughout the year to hundreds of thousands of people. (It is funded by) offerings made by people,” Badal pointed out.

“The central government should immediately withdraw the GST on purchases made by the SGPC and other religious institutions that are doing community service of this magnitude,” Prithipal Singh, a devout Sikh who has been doing voluntary service at the Langar Hall of the Golden Temple complex in Amritsar for the past nearly a decade, said.

Under the new GST Act, there is provision for exemption to institutions/businesses on the recommendation of the GST Council. 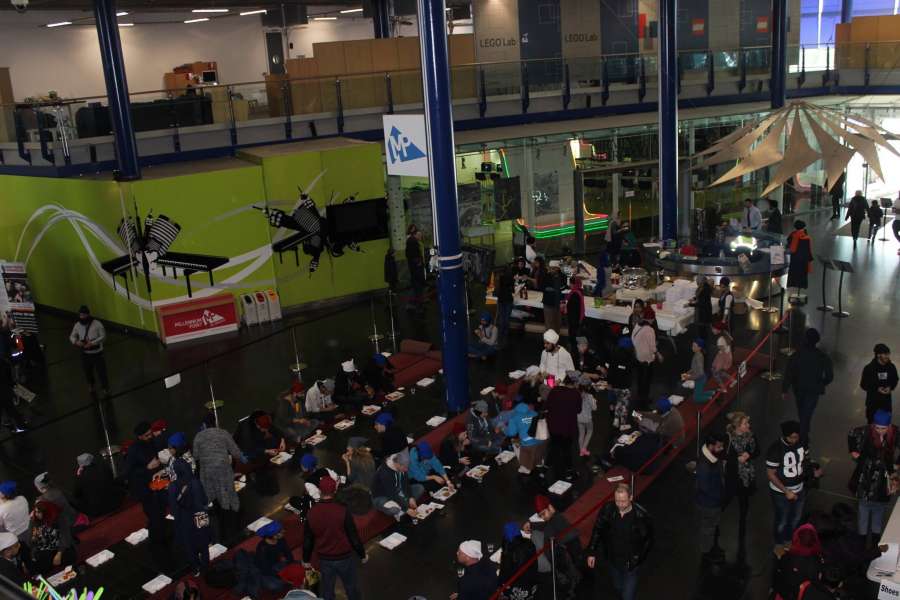 Hundreds of people volunteer on a daily basis at the Golden Temple complex and other gurdwaras to prepare and serve food and wash used utensils at the langars. The volunteers include scores of women and children as well. People partake langar while sitting on the floor in the langar halls of gurdwaras.

The langar service is funded from donations made by people at gurdwaras. The SGPC has an annual budget of over Rs 1,100 crore to manage the gurdwaras under it.

“Anyone coming to the langar is offered food. No one is ever turned back. It is part of the Sikh ethos,” volunteer Gagandeep Singh pointed out.

Hundreds of tonnes of wheat flour, desi ghee, pulses, vegetables, milk, sugar and rice are used, along with millions of litres of water, annually at the Golden Temple complex and other gurdwaras to prepare langar.

The langar is completely vegetarian.