As Twitterati rallied in support of and against the Citizenship Amendment Act (CAA), #IndiaSupportsCCA trended on the social media platform, drawing funny comments from amused users…reports Asian Lite News

As Twitterati rallied in support of and against the Citizenship Amendment Act (CAA), #IndiaSupportsCCA trended on the social media platform, drawing funny comments from amused users.

The hashtag trended with 40.3K tweets after BJP IT cell head Amit Malviya on December 30 tweeted a video clip captioned, “This train was burnt down by anti-CAA rioters in West Bengal. Those who torched this train didn’t have tiranga and Bapu’s picture in their hands… They were arsonists…These rioters are burning the country in the name of saving the country. #IndiaSupportsCCA”

Replying to Malviya, a auser wrote: “Hello @amitmalviya, looks like you and your team didn’t correct the hashtag. Copy pasted it as it is? What is CCA and why is India supporting CCA? #IndiaSupportsCCA.”

One user did not clearly know the incorrect acronym. He wrote: “Anti-Modi campaign in Dhaka against CAA & praising Mamata Banerjee clearly shows the agenda & interest of Bangladesh Muslims in India. Their illegal entrance and then having India’s Citizenship comes to an end. This is the reason we all say #IndiaSupportsCCA!”

One user posted: “Ok, the BJP IT Cell trended #IndiaSupportsCCA instead of CAA. But it’s not their fault. It is so cold that in a few minutes they will support CCD (Cafe Coffee Day) and we will Barista.” 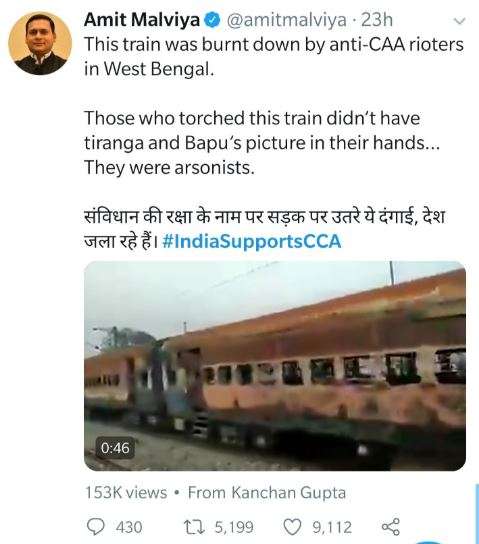 One user commented: “Bhakts are trending #IndiaSupportsCCA instead of CAA. This is what happens when you support something without reading.”

One user tweeted: “Trending #IndiaSupportsCCA is just another in a long line of self-goals proving that the IT Cell ecosystem is neither a representation of India, nor does it speak to the values & opinions of the citizens of this country. Purchased mouthpieces do not equate influence.”