It was a spectacular celebration. The beating of drums, sprinkling of colours, group songs, dancing continued well after dusk….writes Saeed Naqvi

As I watched from my window, a thought crossed my mind: Why had we not been invited? Ours is the only Muslim home in the colony, but a pride of place has always been accorded to us in all celebrations, including Holi. We have inherited this knack of integration from our elders. The Mahant of Shiv Sharan Das temple in Lucknow always made special “bhang”-free “thandai” for my father on Holi.

I called up the President of the Residents Welfare Association (RWA) to register my protest. He was vacationing at Corbett Park. There had been deaths in the neighbourhood; RWA had therefore not organised a Holi celebration. It was private initiative — some friends had come together for the festivities.

We know them well, but they probably did not include us in their list of revellers because they thought we may not be in the celebration mode or in depression at the turn of political events. Such are the ogres imagination conjures up.

Yes, one is afflicted by deep anxiety, but Narendra Modi’s extraordinary victory is only a fraction of the problem. The anxiety is accentuated by the context in which politics is unfolding. Spaces for open discussion — political, social, economic and cultural — are shrinking. In any case they are all in the hands of philistinism and propaganda. This afflicts not all of the media, but a large chunk of it. A creeping voicelessness therefore is our anxiety.

I was with family in Mustafabad, my village near Rae Bareli, where my sister keeps a television with its tube burnt out — no images only sound. It is surrealistic. We heard the election results in stupefied, stunned silence. My cousin Asghar broke the silence.

“The state of the Muslims in the country is just like your television, Suraiya — blind but noisy.”

Suraiya asked: “How have the Muslims fared?”

Asghar: “They have helped the BJP win and now they are terrified at the outcome:

(After men had completed making their God.
Look, they screamed, it is He who made us)”

Juggle around with this couplet and you get a fair idea of how Muslims are themselves responsible for the rise of the Bharatiya Janata Party (BJP). First they help strengthen the BJP, then they cry: We are afraid.

Suraiya was angry. She sought my intervention. “Why blame the Muslims?” she asked.

I said: “Asghar is right. Blindfolded by their myopic mullahs, Muslims have since Partition followed false Gods.”

Next headline: Akhilesh-Rahul Gandhi alliance will attract Muslim votes. Will Rahul repel Muslim votes because of Congress inaction during the demolition of Babri Masjid? Will Akhilesh be able to neutralise Muslim anger against the Congress? Muslim, Muslim, Muslim. Do you think this “Muslim, Muslim” incantation is honeyed music even to the most moderate Hindu? It is custom-made for Hindu consolidation.

Suraiya asked: “Which party then should the Muslims have supported?”

“What do you mean?” Suraiya persisted.

“The only role at this juncture for Indian Muslims in India’s electoral politics is to enable Hindu consolidation. This may not occur to the Muslim voter, but this is the consequence of his politics.”

Basically, the Muslim is not at fault. The Congress is — from the very beginning. When it agreed with Lord Louis Mountbatten and Mohammad Ali Jinnah to Partition the country on religious lines, it had diluted its own stand on the two-nation theory — Hindus and Muslims constituted two separate nations. Once you created Muslim Raj (Pakistan), India had glided seamlessly from British Raj to Hindu Raj.

I have argued this case in my book: “Being the Other: The Muslim in India”. A fair bargain could have been struck with the Muslim even at that stage, avoiding all the hypocrisy about secularism.

The leaderless Muslim, mesmerised by Nehruvian blandishments, pitched his tent in the Congress park as its permanent vote bank.

In the 1980s, V.N. Gadgil, General Secretary of the Congress, took me into confidence. “Muslim appeasement is beginning to rankle with the Congress’ Hindu base.” This “appeasement” was exposed by the Sachar Committee Report in 2005. Successive Congress governments had brought Muslim socio-economic status down even below the Dalits. Some appeasement.

After the Muslim vote defected en masse from the Congress following the demolition of Babri Masjid in 1992, a seering truth has settled in the Muslim mind. The Congress had cheated the community from day one. So he left the Congress but having done so, where should he go? Rank casteist parties — Samajwadi Party (SP) and Bahujan Samaj Party (BSP) — opened their doors. In a daze, the Muslim walked in as an enabler of casteist power. There was nothing in it for him.

And now, Congress, SP, BSP are all fallen icons, piled up in a lifeless heap. Where should the Muslim go?

Suraiya’s was the last word. “Are you saying we should not complain about the BJP’s anti-Muslim plank? They were open on where they wanted to take the nation? Our plaint should be registered against parties which pretended to protect our interest but knowingly or unknowingly facilitated the BJP’s Hindu Rashtra? With rampaging hatred against Pakistan, unsettled conditions in Kashmir, it is custom-made to target us as the Other against which Hindu consolidation will progress.”

Had “Hindu Raj” been accepted at the outset, she added profoundly, the excruciating process of welding “Hindu Rashtra” from the caste pyramid would have been avoided. The Muslim was used as a foil in this process. This hurt. 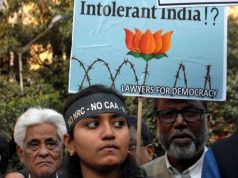