India Monday strongly condemned attacks by terrorist outfits in Iraq, saying that the takeover of cities such as Mosul and Tikrit was a direct threat to security and territorial integrity of the Gulf country. 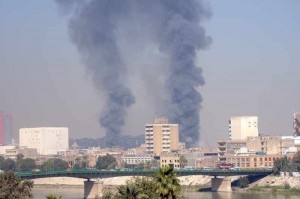 In a statement, the external affairs ministry expressed its deep concern over the “deteriorating security situation” in Iraq resulting from recent attacks and taking over of some cities by terrorist outfits since June 8.

The statement said that safety and security of the Indian nationals in Iraq remains a matter of serious concern for the government.

External affairs ministry spokesperson Syed Akbaruddin said in a tweet that India’s mission in Iraq was in touch with Indian nurses stranded in Tikrit.

The statement said that India remained strongly committed to the emergence of a stable, peaceful, united and democratic Iraq which is in the interest of regional and global peace and security.

“The government of India strongly condemns such attacks and firmly stands by the government and the people of Iraq in their fight against international terrorism and in their efforts to preserve the unity and territorial integrity of the friendly country of Iraq,” it said.

It said that the government has issued an advisory giving details of a 24-hour helpline set up by the Indian embassy in Baghdad for assistance of Indian nationals there.