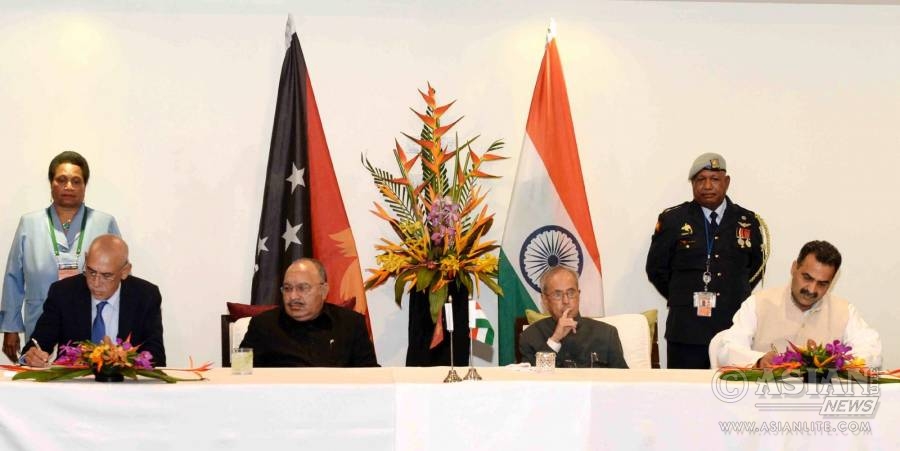 India and Papua New Guinea  agreed to jointly explore and develop the vast oil and gas resources in the Pacific island nation.

Papua New Guinea also welcomed India’s initiative to mobilise solar rich resource countries that lie between the Tropic of Cancer and Tropic of Capricorn through the International Solar Alliance, which was launched in Paris on the margins of the Conference of Parties (CoP) 21 climate summit last November.

Sir Ogio reiterated his government’s support for India’s candidature for Permanent Membership of the UN Security Council (UNSC), “especially in light of the constructive role played by India in different multilateral fora and in recognition of India’s continuous support for the issues that are central to the concerns of small island developing states”.

“Both sides discussed bilateral cooperation in the area of maritime security,” the statement said.

“India also offered to share its advanced techniques and technologies in the agriculture sector. In this connection, the leaders welcomed the MoU (memorandum of understanding) between the Indian Council for Agricultural Research and the Papua New Guinea University of Technology, Lae,” the statement said.

The two sides finalised and signed a MoU for broad ranging cooperation in the Health sector.

Mukherjee announced that India would provide retro-viral drugs and equipment for the treatment of 20,000 HIV patients in Papua New Guinea for one year.

An MOU for an Indian line of credit of $100 million for development of infrastructure in Papua New Guinea was also signed during the visit.

“Both leaders welcomed the signing of another MoU under which India will set up a Centre of Excellence in Information Technology in Papua New Guinea,” the statement said.

Mukherjee and Sir Ogio unequivocally condemned terrorism in all its forms and manifestations and called upon all states to reject the use of terrorism as an instrument of state policy.

“Both leaders agreed to cooperate in building an international consensus against support and financing of terrorist organisations,” the statement said.

“The two sides agreed to strengthen cooperation in multilateral fora in combating terrorism in all its manifestations and for the early adoption of India’s proposal for a Comprehensive Convention on International Terrorism in the United Nations.”

“In this regard, both leaders noted the endorsement by the Regional Integrated Multi-Hazard Early Warnings Systems (RIMES) Council in July 2015 of the establishment of the RIMES Sub-Regional Hub for monitoring earthquake/tsunami and extreme weather patterns and climatic conditions in Papua New Guinea and the Pacific region in Papua New Guinea with support from the government of India,” the joint statement said.