Prime Minister Narendra Modi, addressing a joint session of the Bhutanese parliament Monday, assured that ties between India and Bhutan are very strong and change of government will not alter the dynamics of bilateral ties. 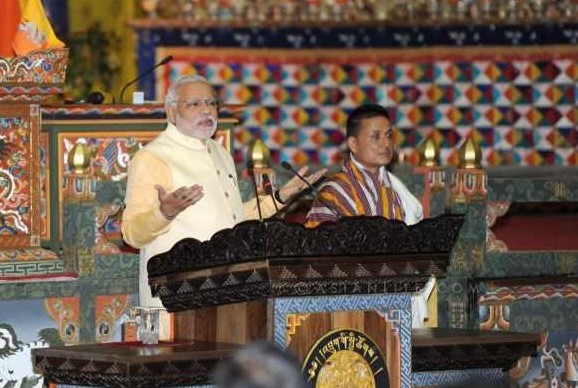 “I assure you that relations between India and Bhutan are very strong,” said Modi.

“India is committed to good relations with its neighbours,” Modi said in Hindi.

Modi, who arrived here on Sunday on a two-day official visit, said if India progresses, it will directly impact the development of its neighbours.

“Stability and development in India will help neighbours like Bhutan,” he said.

The prime minister lauded the Himalayan nation for the smooth transition from monarchy to democracy and said it showed the maturity in their governance.

He assured Bhutan of India’s support in its development, saying: “If you walk a few steps ahead, we too feel like walking those steps ahead and supporting you.”

Hailing Bhutan for promoting education by “devoting a lot of resources,” Modi said: “Terrorism divides and tourism unites. Bhutan has rich potential for tourism to grow.”

He said that India wanted to take forward its hydropower cooperation with the Himalayan country in a major way and also equip its youth with technology to be able to match strides with others in the world.

The prime minister said that Indian satellite technology could be roped in to help Bhutan.

“Can our satellite technology and space technology help Bhutan better? Our scientists should think about this,” Modi said.

Modi also said he chose to visit Bhutan for his maiden tour overseas as the relations between the two neighbours go back many years and are very strong.

He praised Bhutan for showing so much progress despite adversity.

He praised the royal family of Bhutan for the progress of the Himalayan nation.

He said that India’s proposal, announced Sunday, on setting up a digital library in Bhutan was aimed at connecting the youth of both countries.

“Whatever technology is required, India is ready to provide, to help the youth of Bhutan match steps with others in the world,” he said.

Modi said he could have chosen to go to any big nation after the huge mandate he got in the general election, but he decided on Bhutan. “But I wanted to go to Bhutan, so I did not have to think… We share such close and friendly ties,” he said.