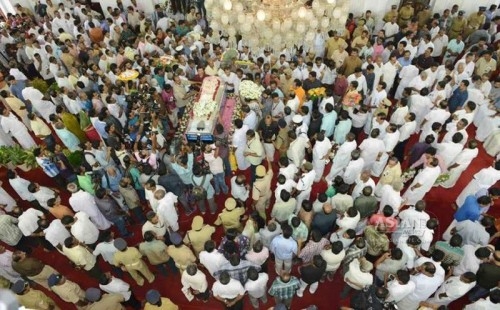 Karthikeyan, 66, passed away at a private hospital in Bengaluru on Saturday and was cremated here with full state honours on Sunday night.

Karthikeyan is the first speaker in the state to die during an assembly session.

Deputy Speaker N. Sakthan Nadar, who has been deputing since the last assembly session in December, broke down while reading the obituary reference.

He stuttered and his voice turned feeble as he found it difficult to hold back his tears when he said that he had a brotherly relationship with Karthikeyan.

Chief Minister Oommen Chandy said Karthikeyan’s most important contribution was the Rajiv Gandhi Centre for Biotechnology that he started as a NGO.

Opposition leader V.S. Achuthanandan said unlike the autocratic style of certain speakers, Karthikeyan was truly democratic and showed the high regards for the opposition.

Other party leaders praised Karthikeyan for respecting others. After observing silence, the house adjourned for the day.