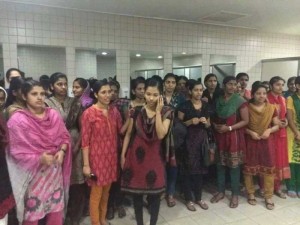 Seventy-four nurses from Kerala working at the Baghdad Medical City are in two minds – whether or not to return to India – following the violence in the Middle East nation, a nurse said Monday.

The nurse said over phone from Baghdad that at the moment things were normal where the nurses were located, and the situation remains as it was when they arrived in January.

“Occasionally, we hear sounds of explosions… and by now, we know when a car bomb has exploded. This has been like this since we came. If you ask us, right now things are the same as we first came, so honestly we are in two minds,” the nurse said.

The 74 nurses reached Baghdad in two groups. While some of them have been there for 18 months, the rest reached there in January.

“If there are no issues here, we want to be here and working. If not, we want to return. Even though we came here in January, we inked our contract in September 2013 and now the management is asking us to sign the next contract and our deadline is fast approaching,” the nurse said.

She said they stay in the large hospital compound, and venture out only to send money to Kerala once in two months.

“And for that, we take the help of the hospital security staff, who accompany us to the money exchange house. If not, we are always inside the hospital compound. We have cafeteria facilities inside the campus itself and there are shops too,” she said.

Kerala Chief Minister Oommen Chandy Monday said in the state assembly that if any Keralites in Iraq wants to return, they will be brought back by the government.