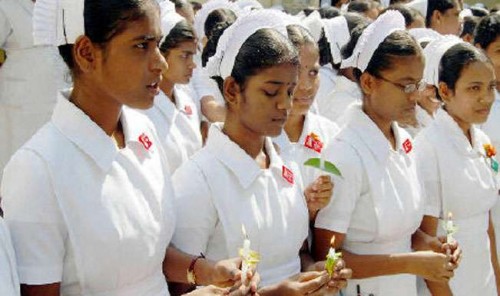 The Kerala government has written to External Affairs Minister Sushma Swaraj to put on hold the new order that requires all Indian nurses going to 18 countries for employment to take emigration clearance from the Protector of Emigrants (POE).

“All those nurses who got a job after reaching various airports were not allowed to go because they did not have the clearance from the POE. So, we have written to the central minister to ensure that status quo is maintained till the formalities for the new order are taken care of,” state Minister for Rural Development K.C. Joseph said.

As per the Centre’s new directive, starting May 1 all nurses’ recruitment from India will be done by the two Kerala-run organisations, which have offices across the major metros in the country. And all nurses have to take emigration clearance from the Protector of Emigrants (POE) before taking up the jobs abroad.

“The directive of getting a clearance from POE, till our system is in place, is causing hardships to new recruits. Hence, we’ve asked the Centre to maintain status quo,” added Joseph.

“There are quite a few issues to be tackled before this is streamlined. Out of the 18 countries for which our agencies have been selected for recruitment, it’s only with the government of Kuwait that we have commenced talks. Very soon, a team of officials from Kuwait will be visiting us to finalise the modalities of selection,” said Joseph.

Starting May 1, two-state agencies Overseas Development and Employment Promotion Consultants (ODEPC) and Norka-Roots – the agency that looks after the welfare of the Kerala diaspora – have been mandated by the Centre to recruit Indian nurses to 18 countries, which includes all the Middle-East countries.

“As per the new rule, all the 18 countries where nurses’ recruitment has to be conducted must first get in touch with the Indian embassy in those countries and also provide the terms of employment, Once that is cleared, then the Indian embassy will get in touch with the Kerala government agencies. After the selection is done, the nurses can have an easy passage by paying a nominal recruitment fee,” Joseph explained.

Once the system is in place, the nurses would be required to pay around Rs.50,000 as recruitment fee. The present rates charged by private recruitment agencies are in the range from Rs.1.5 million to Rs.2 million.