The historic Paris Climate Change Agreement signed by India and 174 other countries affords “business a chance to redeem itself from the trust deficit” bedeviling it, according to industrialist Anand Mahindra.

Speaking on behalf of the world’s corporate sector at the start of the signing ceremony on Friday, he said: “For corporations this is the first step towards visibly integrating our interests with the interests of the future of the planet. It is our responsibility because we have contributed to the problem. And it is up to us to help mitigate it.”

“But it is also an opportunity because this mitigation gives business a chance to redeem itself from the trust deficit it has been facing after the 2008 Occupy Wall Street Movement,” he added, referring to the youth-driven anti-capitalist movement that rocked New York, the world’s financial capital, and spread elsewhere.

In a singular honor, the chief executive of the Mahindra Group, shared the platform with presidents, prime ministers, US Secretary of State and a princess who spoke at the ceremony, which also featured the actor Leonardo Di Caprio, the UN Messenger of Peace.

Mahindra likened the process of arriving at the Paris agreement to the “manthan” or churning in the Hindu scriptures that brought forth amrit or nectar of everlasting life, in this case the pact to “safeguard the world as we know it”.

“This agreement has not come easily,”he said. “It came after much debate, much discussion, much churning. And the word churning brings to my mind a story form Indian mythology, about manthan, the great churning of the cosmic ocean. In that story after eons of bitter divisions, gods and demons decide to put aside their differences and work together to jointly churn the cosmic ocean to obtain its treasures.”

“That churning is not easy. It results in great upheaval and in turbulence. But at the end of this joint enterprise wonderful things begin to emerge from the churned ocean,” he said. “Most importantly, there emerges the amrit, the nectar of eternal life, which is now available to all those who participated in the journey.”

“Now our transition to a greener way of life is also happening after much churning,” he said. “But in this indisputably positive things are beginning to emerge.”

He said that investments in renewable energy are outstripping investments in conventional energy for the first time and Mahindra Group has “invested more than US$350 million for the green revenue portfolio and it is going to be one of the best investments we have made.” 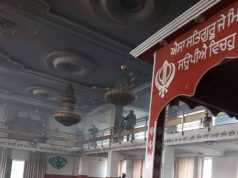