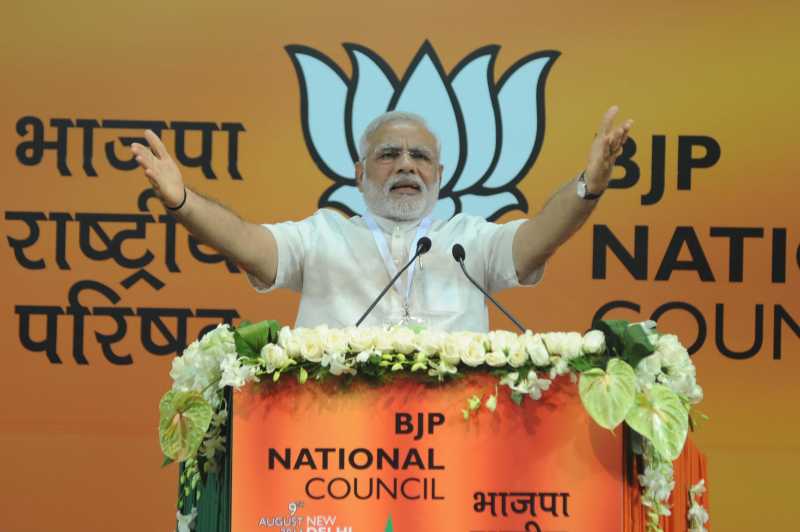 Indians across the country Friday heaped praise on Prime Minister Narendra Modi after his stirring and maiden Independence Day address — for capturing the nation’s imagination. In city after city, and on the social media, the young and the not-so-young universally hailed Modi’s over hour-long speech in Hindi at the Red Fort, comparing it with the dour and dull way Manmohan Singh spoke.

In his trademark style, the 63-year-old prime minister, who took office only in May, spoke extempore and with his usual confidence, taking a peep at his notes only occasionally.
Most people were impressed the way Modi communicated. A few were overawed by what he spoke.
“I am very much inspired. He spoke from his heart. I will personally do whatever I can for the country’s development,” engineering student Prafulla Sahu, 22, said in Bhubaneswar.
“It was really a great speech. The prime minister tried to give us a roadmap to take the nation forward,” said Jitendra Singh, 42, a Rajasthan government employee, in Jaipur.
Said K. Srinivasan, a retired bank employee in Chennai: “The speech shows that India now has a great leader. It is a speech of a statesman and not a politician.”
Added fellow Chennai resident C.R. Gopalrathnam, a senior executive in an IT company: “The speech was extempore and electrifying.”
Sahil Sharma, 26, a creative copywriter with a NGO in New Delhi, told IANS: “It was an electrifying speech delivered with so much confidence. That he described himself as the Pradhan Sevak was highly impressive.”
In Agra, K.C. Jain, president of the Real Estate Developers and Colonisers Organisation, said: “The speech touched the common man.”
Raghav Nehra, 20, an engineering student in Chandigarh, said: “I was impressed that he spoke impromptu. There was no paper reading. The speech definitely had emotion and connect with the people.”
Said Sunny Singh, 46, a businessman in Jalandhar: “The speech was inspiring. It had freshness. Earlier speeches by prime ministers were a drag.”
Medical professional M. Harris, 37, in Thiruvananthapuram, said: “It is the best I have heard so far. He was doing it extempore. He spoke very well. I never thought I will hear it from start to finish but I did that.”
M.R. Kaushal, a retired government employee in Shimla, told IANS: “I have never heard any prime minister who repeatedly addressed himself as ‘Pradhan Sevak’.”
School teacher Banambara Mishra said in Odisha: “His speech will encourage people to maintain cleanliness.”
Entrepreneur Rakesh Kandolkar, 30, said in Panaji: “Modi’s speech was a fresh breath of air after a decade of dour speeches by Manmohan Singh.”
Anil Bhagawati, 72, a pensioner in Guwahati: “I could feel the change the country is going to witness in the days to come.”
Meenakshi Baruah, a teacher in Morigaon in Assam: “For a change, I felt something as I was listening to the speech… It is a kind of fresh air.”
Umesh Mehta said on Twitter: “After hearing inspiring, evocative and emotional speech, feeling really happy and charged. JAI HIND!”
K.P. Sharma: “Modi’s speech electrified Indians, young and old alike.”
Sanjeev Sanyal: “Wow, what a speech! Modi lays out a clear, actionable vision for India.”
Smita Barooah: “Our nation has a roadmap. Our nation is in safe hands.”