In the video clip, Maradi is seen and heard saying in Kannada that the “Sene would give Rs 10-lakh award to anyone who kills Amulya, who shouted ‘Pakistan zindabad’ thrice at a rally in Bengaluru the other day”…reports Asian Lite News

A pro-Hindu outfit leader is under the scanner for allegedly offering a Rs 10-lakh reward to anyone killing Bengaluru student activist Amulya Leona, jailed for shouting pro-Pakistan slogans at an anti-CAA rally here on Thursday, police said on Sunday.

“Though no complaint has been filed or case booked against Sri Rama Sene leader Sanjeev Maradi for making the alleged offer, we are analysing a video clip being circulated on social media to ascertain its content and summon him for questioning,” Ballari Superintendent of Police C. K. Baba told IANS on phone.

Ballari is about 31 km northwest of Bengaluru in the southern state.

Neither Ballari-based Maradi, nor Sene chief Pramod Muthalik were reachable for authenticating the threat and the bounty in the video clip in circulation.

“We will book a case against Maradi if he made such an offer and owns it up as it amounts to abetment of the crime,” asserted Baba.

In the video clip, Maradi is seen and heard saying in Kannada that the “Sene would give Rs 10-lakh award to anyone who kills Amulya, who shouted ‘Pakistan zindabad’ thrice at a rally in Bengaluru the other day”.

The 19-year-old college student was arrested and sent to 14-day judicial custody on Friday on sedition charges under Section 125A of the Indian Penal Code (IPC) for the pro-Pakistan slogan at the anti-CAA rally at Freedom Park in the city centre.

In the video clip that went viral, Maradi also said Amulya should not be given bail for any reason and threatened to stage an encounter to eliminate her when she is released from the central jail on the city’s southern outskirts.

“We will give Rs 10 lakh to anyone who stages the encounter to eliminate her,” Maradi is heard claiming.

In fact, All India Majilis-e-Ittehadul Muslimeen (AIMIM) president and its Lok Sabha member from Hyderabad, Asauddin Owaisi, who was present on the occasion, tried to stop the gritty Amulya from repeating the pro-Pakistan slogan. 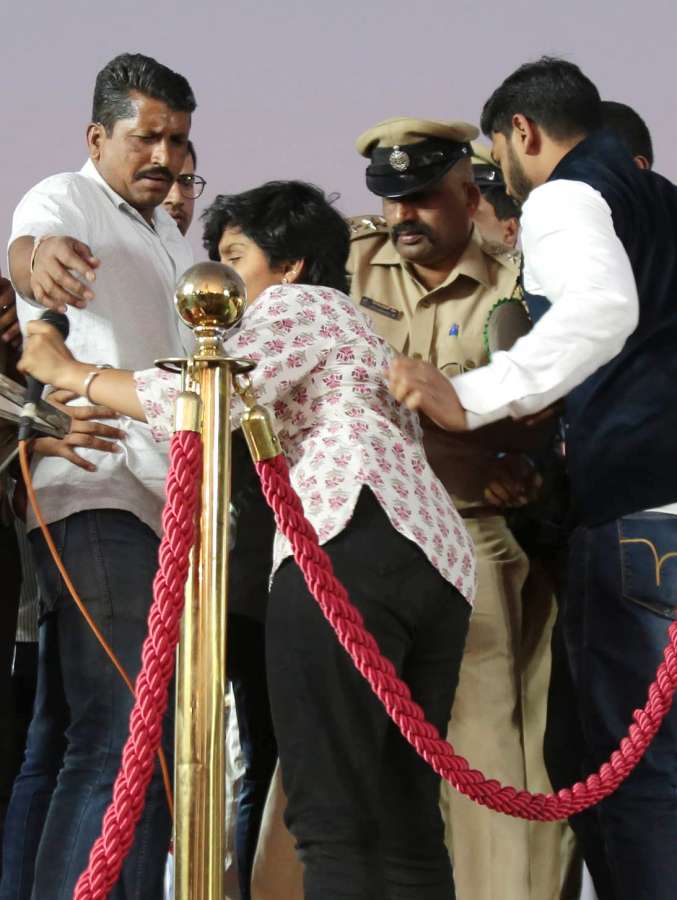 The dramatic incident, which embarrassed Owaisi and the rally organisers – Hindu-Muslim-Sikh-Issai Federation, occurred when Amulya was called on the dais to address the gathering in protest against the Citizenship Amendment Act (CAA) under the banner of “Save Our Constitution”.

“When Owaisi and others tried to stop Amulya from shouting the pro-Pakistan slogan, she started chanting ‘Hindustan zindabada’. Our personnel who were at the rally for providing security, took her off the dais to control the situation even as she insisted on speaking,” a police official told IANS on Thursday.

Owaisi condemned Amulya for taking the liberty of shouting the pro-Pakistan slogan and told the organisers to stop her from speaking.

“When Amulya resisted the organisers from addressing the gathering, our policewomen had to forcibly escort her from the stage and detain her in a corner,” the police official added.

Regretting the incident and denouncing the activist, Owaisi said in Hindi-Urdu that he and his party was against such sloganeering as they are for India and proud of being Indians.

“We do not agree with the activist shouting such slogans. The organisers should not have invited her to the rally. If I knew this, I would not have come and we don’t have any link with her. We are for India and don’t support our enemy nation Pakistan. Our drive is to save India and our Constitution,” added Owaisi.