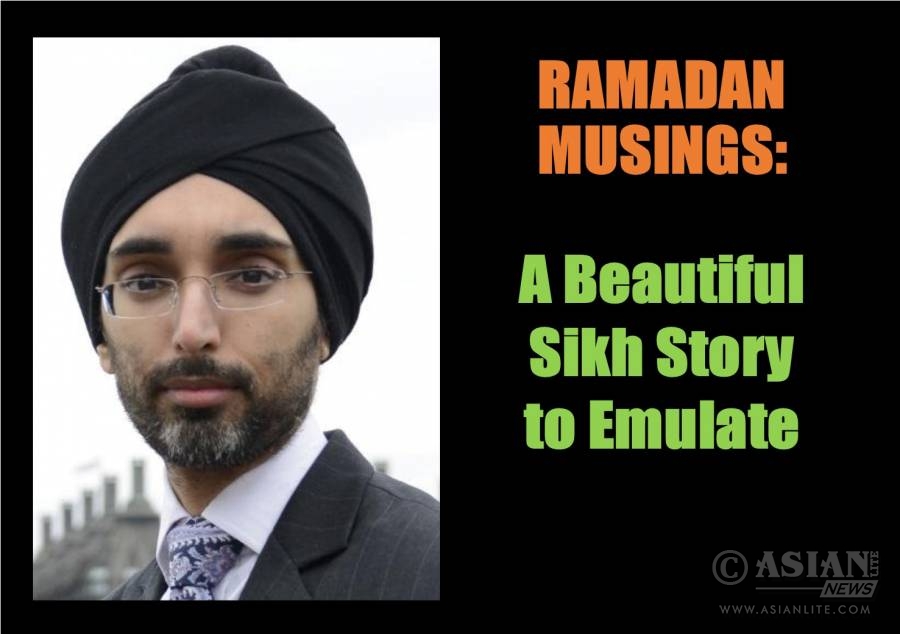 Asian Lite newspaper marks Holy Month with a series of Ramadan Musings with Masarat Daud. In this dispatch she talks to Jasvir Singh, a family law barrister and the Co-Chair of Faiths Forum for London

Talking to Jasvir Singh, a family law barrister and the Co-Chair of Faiths Forum for London, I learn that there is no concept of fasting within the Sikh tradition.

“We have langar instead. It is an open and free kitchen, which is a way of greeting individuals and showing them hospitality. It is an obligation on us that nobody goes hungry. The practice of serving langar is a spiritual and physical nourishment,” says Jasvir.

From childhood, the regular visits to Gurudwara (the Sikh place of worship), Jasvir had an early awareness of what his faith meant to him.

He explains that the word “Sikh” comes from “Sikhya” which refers to learning and to be a student. It is the ethos he embodies and says that it is a philosophy one follows his or her entire life.

A story that stands out for him, which he returns to regularly is one of Guru Nanak’s where he teaches the importance of hard work and making one’s living based on it; the message in this story is to live and engage with society. Jasvir narrates the story:

“One day, during Guru Nanak’s travels, he stopped at a town. There was a wealthy merchant who lived there and was well-known. He had acquired his wealth through unfair means and corruption. The merchant invited Guru Nanak for a feast, which was being held for all religions and spiritual leaders of the town. But Guru Nanak refused. He instead opted to stay with a poor carpenter who could not afford such a lavish feast. The only food he could provide were dry rotis (flatbreads) without any smothering of ghee on it.

The merchant was angered when Guru Nanak did not attend his feast. He sent his people to call Guru Nanak. When he went to the merchant’s house, he was asked why did he choose a dry roti over his feast?

Guru Nanak replied that he cannot eat a roti that is made of other people’s blood, referring to the merchant’s corrupt acts, while the carpenter’s roti dripped off milk because it was earned through his hard work. As proof, Guru Nanak held the rotis made by the carpenter and from the merchant’s feast in each hand and squeezed them lightly. And indeed, blood dripped from one and milk from the other. The merchant was ashamed and vowed to fix his wrongs.”

This story has a deep importance in Jasvir’s life. He continues, “To me, this is a lesson on living and finding an acceptable way of life. We have to become self-reliant and never choose to depend on others.”

A beautiful, simple story with a powerful lesson for all us to think about.

(Masarat Daud is many things. A girl’s education campaigner, a TED speaker, a TEDx curator, a recent SOAS MA graduate and a politically-incorrect humourist currently based in London)