The Telangana government Monday decided to officially celebrate Bonalu and Bathukamma, the Hindu folk festivals of the region. 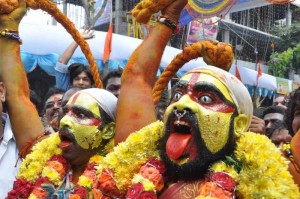 The decision was taken at a meeting convened by Chief Minister K. Chandrasekhara Rao with senior officials and public representatives belonging to various political parties.

The chief minister directed the officials to ensure that the festivals are celebrated in a grand manner. The government will make adequate funds available for making the arrangements.

As the two festivals reflect the culture of Telangana, the Telangana Rashtra Samithi (TRS) government has decided to declare them state festivals.

Bonalu is celebrated in twin cities of Hyderabad and Secunderabad and other parts of the region during the month of ‘Ashada’ (July-August). The women make offerings in the form of food to goddess Mahankali in specially decorated pots. During the month-long festival, people also hold ‘rangam’ or forecasting the future, organize processions and cultural events.

‘Bathukamma’, another key festival of Telangana, is celebrated during September-October. It reflects the rich culture of the region.

At another meeting, the chief minister reviewed the arrangements for the Muslim holy month of Ramadan. He directed the officials to take all measures for the smooth conduct of the holy month celebrated on a grand scale in Hyderabad.

Majlis-e-Ittehadul Muslimeen (MIM) chief Asaduddin Owaisi and other party leaders urged the chief minister to allow the traders in Hyderabad to do business round-the-clock during Ramadan.

Asian News from UK
Leading Newspaper for Politics, Business & Economy
Telangana
We use cookies on our website to give you the most relevant experience by remembering your preferences and repeat visits. By clicking “Accept”, you consent to the use of ALL the cookies.
Cookie settingsACCEPT
Manage consent