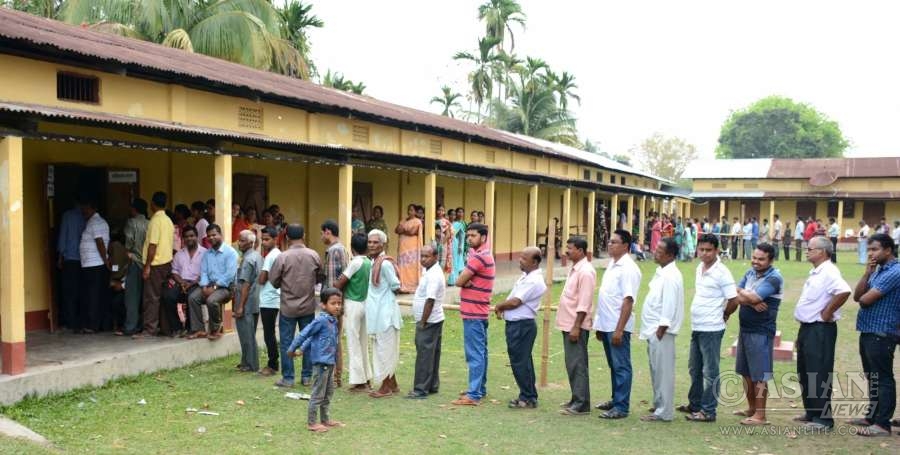 Both the BJP-led alliance and the Congress have left no stone unturned in securing tribal votes which may turn out to be a key factor in deciding the result of the ongoing Assam assembly election. Of all the tribal communities of the state, the electoral behavior of the tea tribes comprising about six million has become most crucial.

The tea tribes comprise the people whose ancestors were brought during the British period from mostly the Chhotanagpur plateau and other areas of the present day Jharkhand state to work as labourers in burgeoning tea plantations. They are now mostly scattered over 739 registered tea gardens in the Brahmaputra and Barak valleys and comprise 17 percent of Assam’s population.

This time, their vote is going to decide the fate of Assam Chief Minister Tarun Gogoi, who is contesting from the Titabor constituency in the tea garden belt of Jorhat district. Here Gogoi is pitted against Kamakhya Prasad Tasa, the incumbent BJP Lok Sabha MP from Jorhat.

The tea tribes’ votting pattern is likely to be influenced by their long-standing demand for being accorded the Scheduled Tribe (ST) status. Right from the first general election of 1952 they had supported the Congress but sided with the BJP during the 2014 Lok Sabha poll when the tea garden-dotted seats of Dibrugarh, Jorhat and Tezpur were won by the saffron party.

This time however the BJP has a lot to explain. It had promised ST status to the tea tribes before the parliamentary election but that is yet to fructify. Although the centre has set up a committee to suggest modalities for granting ST status to the tea tribes and five other tribal communities – Koch-Rajbangshis, Tai-Ahoms, Morans, Sootias and Mataks – the BJP camp is not yet very sure about their voting preferences.

The BJP stalwarts of Assam are, however, pinning great hopes on Kamakhya Prasad Tasa and Rameshwar Teli, both hailing from the tea tribe community and now MPs of Jorhat and Dibrugarh respectively. Tasa was the general secretary of the Assam Tea Tribes Students’ Association (ATTSA) which, along with the All Adivasi Students’ Association of Assam (AASAA), is supporting the BJP in the assembly poll.

The Congress and the BJP, the two mainstream political parties in Assam, fully understand the importance of the tea garden tribes in Assam politics. These tribes have 3.5 million votes in their kitty, enough to make or mar the prospects of any contestant. It has been calculated that the tea tribes have decisive roles in 35 assembly seats. In the 2011 assembly election, the BJP had triumphed in only one of these 35 seats, while the Congress had won 26. But in the last parliamentary poll, the picture got reversed and 26 of these 35 seats were among those 69 seats where the BJP had polled the highest votes.

If the Narendra Modi government in Delhi cannot take the tea tribes into confidence over the question of ST status, then there may occur a reversal in their voting pattern.

Fifteen seats are reserved for the scheduled tribe community in the 126-member Assam assembly. Of them, four are in the Karbi Anglong district and represented by Karbi MLAs, one in Dima Hasao district, three in Upper Assam and always represented by the Mishing tribe, while another one was for long represented by the Rabhas but was snatched away by the Bodos in 2011. The remaining six are in the Bodoland Autonomous District area.

The Congress understands the importance of the tea tribes in Assam elections. On the streets of Guwahati one can hear a buzz that Pawan Singh Ghatowar, a trade union leader of the Congress, may become the chief minister if his party wins the election. Ghatowar hails from the tea tribes and is the president of the Assam Cha Mazdoor Sangha. This may be a Congress ploy to sway the tea tribes’ votes in its favour, notwithstanding the fact that Gogoi has already crossed 80 years.

Assam’s tea industry in Assam employs 500,000 permanent and 600,000 temporary workers. Sensing their political importance, Gogoi has prepared a draft notification which seeks to enhance the daily wage of a tea labourer to Rs.177. The notification also has three other components promising housing, water supply and communication facilities to the tea garden workers.

Gogoi has left no stone unturned to placate the plantation community. He has written to Narendra Modi for a Rs.5,568 crore (more than $385 million) special package and requested him to amend the Plantation Labour Act,1951. The Assam government has also released 76,000 tonnes of rice and 5,000 tonnes of wheat for distribution among the plantation labourers.

But for whom will Assam’s tea tribes vote ? That is the million dollar question.