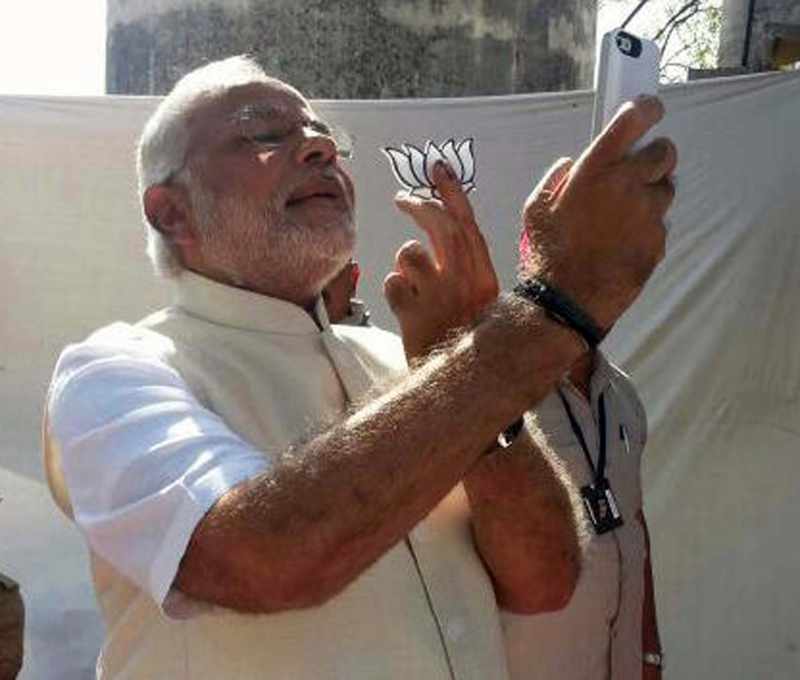 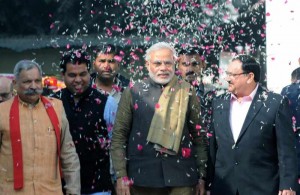 The BJP was Friday set for a comfortable majority in the Lok Sabha, its candidates taking early leads in 265 of the 498 seats in two hours of vote count across the country.

The Congress, India’s oldest political party which had ruled India for a decade since 2004 at the head of the UPA, appeared set for an unprecedented rout. The first seat went to the Bharatiya Janata Party (BJP) — in Baghpat in Uttar Pradesh where its Satyapal Singh, a former Mumbai police commissioner, defeated RLD leader and Civil Aviation Minister Ajit Singh. Information from the Election Commission indicated a BJP sweep in northern, western and central India, and the party was also making gains in states where it has been traditionally weak. The stock market shot up on news of the imminent BJP victory. In a spectacular performance, the BJP was on the victory march in 25 out of 26 seats in Gujarat, 24 out of 25 seats in Rajasthan, all four seats in Himachal Pradesh, all seven seats in Delhi and four of five in Uttarakhand. Officials said counting trends were now available in 498 of the 543 seats. All BJP stalwarts barring Arun Jaitley were on the victory lap including prime ministerial candidate Narendra Modi in both Vadodara in Gujarat and Varanasi in Uttar Pradesh. So were L.K. Advani in Gandhinagar, Rajnath Singh (Lucknow) and Nitin Gadkari (Nagpur). Jaitley was trailing to former Punjab chief minister Amarinder Singh of the Congress in Amritsar. Congress candidates led only in 47 of the 498 constituencies, that too mainly in the south, amid signs that the party might end up with a two digit figure for the first time in the Lok Sabha. BJP president Rajnath Singh described the party’s perforance as “superb”, and said the trends indicate a landslide. Rajnath Singh said he telephoned Modi and congratulated him. In a tacit admission of defeat, Congress leader and Parliamentary Affairs Minister Rajeev Shukla told NDTV: “We are all responsible (for the poor show).” There was no immediate word from Modi, now in Gandhinagar. But BJP activists broke into wild celebrations across the country, dancing to drum beat, bursting firecrackers and distributing sweets to all and sundry. Congress president Sonia Gandhi appeared headed for victory in her Rae Bareli seats but her son and party vice president Rahul Gandhi led by a slender 1,000 votes after initially being in the second spot. Many Congress veterans seemed set for a defeat including Home Minister Sushilkumar Shinde (Solapur), Ambika Soni (Anandpur Sahib), Kapil Sibal (Chandni Chowk) and Pawan Kumar Bansal (Chandigarh). The Trinamool Congress was ahead of others in 20 of the 42 seats in West Bengal. The AIADMK came up with a stunning performance in Tamil Nadu, taking the victory lead in 30 of the 39 seats. The CPI-M and Shiv Sena were on the victory lap in 11 seats each, followed by the Samajwadi Party in nine constituencies. The Aam Aadmi Party (AAP), which ruled Delhi for 49 days until Feb 14, was in the second spot in all seven seats in Delhi, relegating the Congress to a humiliating third place. An army of officials Friday morning began counting the 550 million votes polled in the staggered Lok Sabha election that began April 7 and ended May 12. Exit polls had predicted a victory for the BJP and its allies.