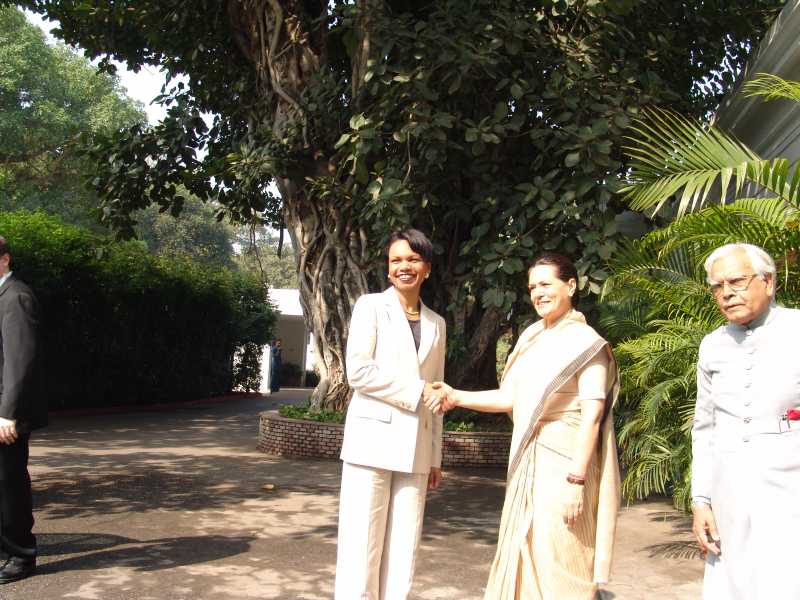 “Hindu way of truth”
My truth is better than your truth: Natwar says he has written the ‘truth’; Sonia Gandhi says the ‘truth’ will come out when she writes her book. Reminds me of Nehru’s interaction with Alistair Cooke, who told him: “When I became a journalist I was taught there were two sides to every story. But I find frequently there are four or five sides to a story.” Nehru replied: “Alistair, welcome to the Hindu view of truth.”

Congress president Sonia Gandhi Thursday refuted former union minister Natwar Singh’s allegation that she had access to government files, while also voicing her wish to write a book herself for “everyone to know the truth”. She was backed by former prime minister Manmohan Singh who said “private conversations should not be misused for capital gains”.

“I will write my own book and then everyone will know the truth,” Gandhi told news channel NDTV.

“The only way the truth will come out is if I write. I am serious about this,” she said. Natwar Singh, a former minister in the UPA-I government and thought close to the Gandhi family, alleged in an interview that Gandhi’s decision not to take up the post of prime minister in 2004 was not because of an “inner voice” as she had famously said.
It was because of opposition from her son Rahul Gandhi, who was reportedly worried that she would be assassinated like his father Rajiv Gandhi and grandmother Indira Gandhi, both former prime ministers.
He also claimed that Sonia Gandhi had access to government files and these were taken to her by bureaucrat Pulok Chatterji, then in the Prime Minister’s Office
The charges were denied by Manmohan Singh who said no files were sent from the Prime Minister’s Office to Sonia Gandhi’s office.
“Private conversations should not be misused for capital gains,” he said.
Sonia Gandhi added that she is “used to such attacks”.
“I can’t be hurt… I have seen my mother in law riddled by bullets, my husband dead…I am far from getting hurt with these things…Let them continue to do this it will not affect me…They can continue to do this if they so please,” she said.
Natwar Singh, 83, had to resign from the Congress-led coalition government in 2005 after allegations of corruption. His autobiography “One life is not enough” is due to release on Aug 1.
Congress spokesperson Abhishek Manu Singhvi said Natwar Singh was sensationalising “information shared to him on sensitive issues in keeping with his ministerial rank” for commericial ends.
“We clearly refute every allegation levelled by Natwar Singh in an interview ahead of his book’s release. This sensationalisation was necessary to ensure commercial success of his book,” Singhvi told media persons.
He said it may be noted that Natwar Singh had had an unceremonious exit from the Congress and his son is a Bharatiya Janata Party legislator in Rajasthan.
“Natwar Singh has been trying to join the BJP directly or indirectly for some time. And these facts contradict the facts which he has mentioned in his book,” added Singhvi.