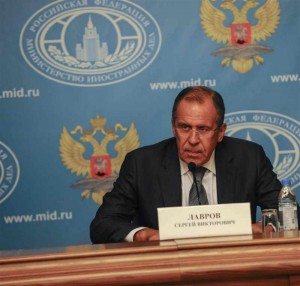 “We don’t want confrontation. But if the West continues its unprofessional and hysterical position, we’ll have to think how to respond,” Xinhua quoted Lavrov as telling the Bloomberg TV channel.

“A Russian man harnesses a horse slowly but drives fast,” he cited a Russian proverb, implying that Moscow might have not retaliated immediately, but its response could be rather painful.

He called Western behaviour as “childish” as the West did not calculate how its sanctions would affect the global economic system.

“If the West, just for the sake of revenge, is ready to sacrifice its reputation as a reliable partner of the entire global economic system, this is their choice,” he said.

The top diplomat cited, particularly, concerns of Visa and MasterCard payment systems over possible loss of the Russian market due to sanctions imposed by the US.

“All this could be substituted,” he said, adding there were many experts in Russia and other countries who knew how that works.

On May 9, Russian foreign ministry spokesman Alexander Lukashevich vowed to retaliate against new sanctions from the West, referring to Moscow’s decision to ban entry for a undisclosed list of Western citizens.

The West accuses Moscow of being behind the chaos in eastern Ukraine where two regions declared independence Sunday amid clashes with government troops. Russia has denied the accusation.