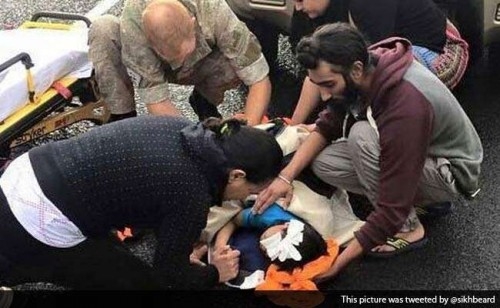 A young Sikh from India who did not hesitate to break religious protocol by removing his turban to help an injured child bleeding profusely after an accident in New Zealand’s largest city of Auckland has earned worldwide praise.

Harman Singh woke up on Sunday to hundreds of messages from around the world praising his humanity. A picture of the 22-year-old Singh who broke religious protocol by removing his turban to cradle a boy hit by a car has turned him into an instant hero, the New Zealand Herald reported.

Singh has since received hundreds of Facebook herograms from the US, Europe and India, he said. His story has been shared tens of thousands of times on social media.

Singh, 22, from India, is in Auckland studying a business course. His act was considered a hugely significant because it breaks strict religious protocol.

He was overwhelmed at the number of messages of support from around the globe. “Total strangers are asking to be friends on Facebook and thousands of people have said ‘Well done’. I was only doing what I had to and trying to be a decent member of the community.”

Singh did not know the injured boy but hoped to hear from his family about his progress.