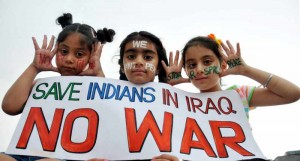 The government Wednesday said the 46 Indian nurses trapped in a building in Iraq’s war-torn Tikrit town were safe and unharmed, and the Indian envoy has spoken with them.

“Our ambassador (in Iraq) has talked to them. They are unharmed, safe,” external affairs ministry spokesperson Syed Akbaruddin said here.

Asked about reports that the building which houses the nurses was being guarded by gunmen of the Islamic State of Iraq and Greater Syria (ISIS), Akbaruddin said he would not comment on what others had put out.

Asked about reports that India was among jihad targets of the ISIS, he said: “India’s safety and security is in safe hands.”

Answering a question about 39 Indians in captivity in Mosul, Akbaruddin said they were unharmed.

He said the “facilitation phase” to help Indian nationals wanting to return from Iraq was proceeding “satisfactorily”.

The government had Tuesday said there was bombing and firing in the vicinity of the building which housed the 46 nurses and they had taken refuge in the basement.