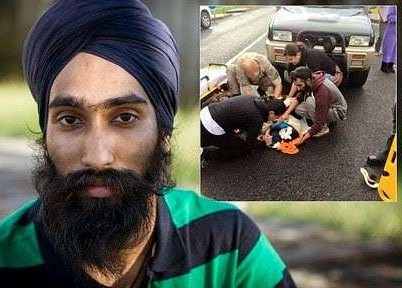 The Sikh man who captured the hearts across the globe when he took off his sacred turban to cradle a boy’s head who had been hit by a car has been rewarded for his kind act after a generous business owner donated new furniture for his sparse home.

Harman Singh, 22, didn’t think twice about breaking strict religious protocol when he came to the aid of five year old Daejon Pahia after he was struck by a car while walking to school on May 15 in New Zealand reports Daily Mail.

The heart warming story went viral around the world making the Indian student, who is studying a business course in Auckland, a reluctant and extremely humble hero.

When New Zealand television channel,One News, visited Mr Singh at his home in Auckland it was discovered that he slept on a mattress on the floor and only had a couple of plastic garden chairs and a small plastic table in his lounge room.

So the TV station decided to get in contact with Big Save Furniture chain store who offered to deck out Mr Singh’s pad much to his overwhelming surprise.

Mr Singh could not believe his eyes when a furniture van turned up in his driveway and began to unload a lounge suite, bed and coffee table.

He was so overwhelmed by the unexpected generosity that he only managed to say ‘thank you I’m very happy’ before he was reduced to tears.

Once he got over the shock, Mr Singh said, while checking out his new comfy sofa, that it was ‘the biggest surprise of my life’.

He then went onto mention his father who passed away last year.