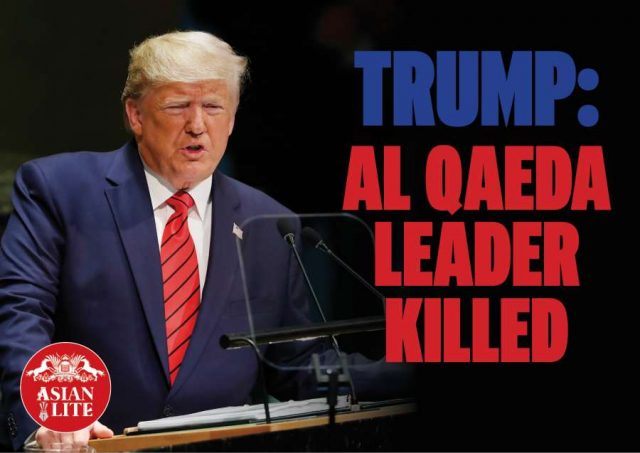 US President Donald Trump has confirmed that Qasim al-Rimi, the leader the Al Qaeda in the Arabian Peninsula (AQAP) terror group, was killed in an operation carried out by American forces in Yemen last month.

“The US conducted a counter terrorism operation in Yemen that successfully eliminated Qasim al-Rimi, a founder and the leader of Al Qaeda in the Arabian Peninsula and a deputy to Al Qaeda leader Ayman al-Zawahiri,” Xinhua news agency quoted Trump as saying in a statement issued by the White House on Thursday.

Trump added that al-Rimi had been a part of the group since “the 1990s, working in Afghanistan for Osama bin Laden” and under him, the Al Qaeda “committed unconscionable violence against civilians in Yemen and sought to conduct and inspire numerous attacks against the US and our forces”, reports.

“The US, our interests, and our allies are safer as a result of his death. We will continue to protect the American people by tracking down and eliminating terrorists who seek to do us harm.”

The 41-year-old Al-Rimi’s death is a major blow for the group, considered one of the most dangerous Al Qaeda branches, as it has carried out attacks beyond its borders in Yemen.

The New York Times newspaper had reported last week that American officials believed they may have killed the leader in January in an airstrike after months of tracking him using aerial surveillance and other intelligence.

According to the daily, the CIA came to know of al-Rimi’s location from an informant in Yemen last November and began tracking him through surveillance drones.

Al-Rimi had led the branch in Yemen since mid-2015 following the death of his predecessor, Naser al-Wahishi, in a US drone strike.

Until then, al-Rimi had been the military chief of the branch and played an important role in recruiting the current generation of its militants.

In May 2010, al-Rimi was included in the US’ most-wanted terrorist list and Washington had also offered a $10 million bounty for information on him.

In 2005, al-Rimi was sentenced to five years in prison in Yemen for plotting to assassinate the American ambassador there but escaped from prison in 2006.

According to US media reports earlier this month, AQAP claimed that it directed the shooting at Naval Air Station Pensacola in Florida last December, which killed three American sailors and severely wounded eight others, the Xinhua news report said.

Last month, US Attorney General William Barr said the shooting, which was carried out by a member of the Saudi Air Force, was “an act of terrorism”.