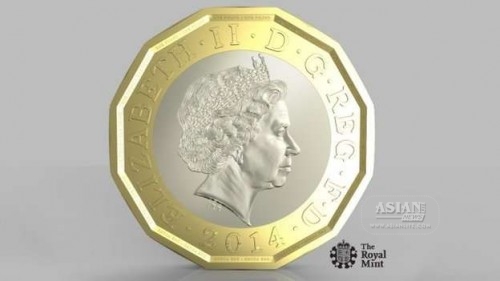 Britain’s Chancellor of the Exchequer George Osborne  revealed the design of a new one pound coin, which was created by a 15-year-old young man, the Royal Mint confirmed.

The new design of the reverse side of the coin features four emblems which represent each of the nations of the United Kingdom — the English rose, the leek for Wales, the Scottish thistle, and the shamrock for Northern Ireland — emerging from a single stem within a crown. The shape of the new coin will no longer be round, but 12-sided.

The work of the lucky young designer, David Pearce, from Walsall, was selected from a public design competition launched in September 2014, Xinhua news agency reported.

“The competition captured the imagination of thousands of people and David Pearce’s winning design will be recognised by millions in the years ahead. It was fantastic to congratulate him and other young entrants in person in Downing Street,” Osborne said.

“I was really excited to hear that I had won the competition to design the new one pound coin but hugely shocked as well. I heard about the competition through my design teacher at school and I thought I had nothing to lose so I decided to enter. I spent a lot of time researching what coin designs looked like and what sort of designs would represent all parts of the UK before submitting my idea and I honestly cannot believe I have won,” said Pearce.

The new coin is expected to enter circulation in 2017.