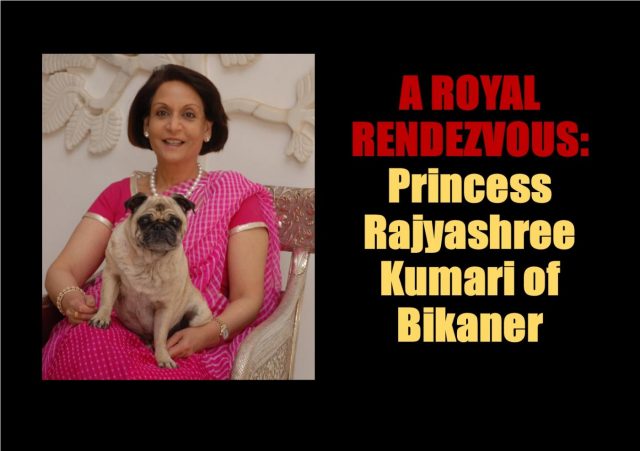 An interview with Princess Rajyashree Kumari of Bikaner on her new hot off the press book Palace of Clouds which is a memoir and follows her adventurous journey from her palatial home in Rajasthan to life in London. An exclusive interview by Columnist Richa Grover for Asian Lite News, the best newspaper for the British Asians

Princess Rajyashree Kumari Bikaner’s memoir, Palace of Clouds (published by Bloomsbury India), evokes the romance of the rugged desert kingdom of Bikaner and its Rajput royal family. The book is a richly woven tapestry encompassing five generations of an aristocratic family’s past and present. Tales of valour, battles and coronations, the splendour of the royal courts, the culture and traditions that made this Rathore state pre-eminent in the world, all set against the backdrop of imposing palaces, rugged forts and hunting lodges, the magnificence of the gilded age of the Maharajas.

The author describes her formative years during the sixties when seismic changes in the world were taking place and which were to take her on an adventurous journey from her home in Bikaner to life in London. The author brings to life a treasure trove of anecdotes and introduces us to a world of elegance, sportsmanship and cosmopolitan culture.

Richa Grover (RG): When and why did you think of writing a memoir style book- palace of clouds and how long did it take you to complete it? What motivated you to embark on this project and how did it all pan out?

Princess Rajyashree Kumari: It seemed a natural progression after my two former books based on my ancestors and our family Palace in Bikaner to simply take the narrative forward and enlarge the scope somewhat. It took absolutely ages! Maybe four years or more to finally complete the script.

RG- What does the title of the book palace of clouds stand to signify? What imagery did you envisage it would evoke in the minds of your readers?

PRINCESS: The ‘Badal Mahal’ in our old Junagarh Fort was the inspiration for the title. It’s a small but very beautiful room painted with deep blue clouds to represent the monsoons, as Bikaner did not have much rain in those days perhaps the ancestors enjoyed an afternoon there to get away from the heat and imagine that the monsoons were here! The room is now copied in many different colours and images all over the world.

RG-The book gives us a glimpse into five generations of your aristocratic family’s past and present… how was it growing up for you as a princess in the sixties in one of the most illustrious families of the country?  and now what does being a modern day princess mean to you in the current global context ?

PRINCESS: There was nothing special in our upbringing my father was a very pragmatic and modern man and he brought us up in a very down to earth way. The sixties was of course a very exciting and vibrant time to be growing up in with constant change in both the arts and culture and quite frankly in daily life of just about everyone.

RG-Tell us a little about your previous books -when did your writing journey begin?

PRINCESS: My first book was on our Palace in Bikaner where we grew up. Five generations of the family have lived there and the property has a rich history to tell, my first book was “Lallgah Palace home of the Maharajas of Bikaner’. My second book was of a more historical nature it was based on my ancestors ‘The Maharajas of Bikaner’ and spanned five centuries from Rao Bika who was the founder of Bikaner state in 1488 to our current time and my brother.

RG-How has this hot off the press book palace of clouds been received so far by readers, reviewers and critics? Are there any more book projects of yours in the pipeline?

PRINCESS: Its early days yet for reviews but my friends and family who are reading the book seem to be very pleased with it.

RG-Who’s been your support system in your journey as an author to help you get it off the ground at times that you may have felt stuck?

PRINCESS: Our archives in Bikaner have been my main support system as each idea that came to me the research material was readily available which made life much easier. This has been the case with all three of my books; also we have a massive selection of photographs both old and new to choose from. So I am very fortunate.

RG- Do you think the title of being a princess from a royal family brings more responsibilities as an author and adds pressure of people’s expectations when they read a memoir? Was this something to had to factor in and deal with before deciding to write this book? Did you worry ever am I giving away too much and how will people react?

PRINCESS: I have never added my title to my name that appears on my books I have kept is very simple. That said many are aware of the name of Bikaner and then make the connection either with my father or from our shooting days. I imagine that there must be expectations when a reader buys a book which has both historic as well as aristocratic connections.

RG-How was it growing up in the palace in Bikaner and how different was it to your adventurous journey and time in London over the years? What did you miss about Bikaner in London and what aspects of the West were like a breath of fresh air while being away from home?

PRINCESS: Growing up in one of the most beautiful palaces in India was an amazing experience, when we were children the whole palace and all its grounds were ours to play in and explore. I was quite happy to make my life in London with my family, we visited India often and my parents remained in touch with me and came to London to spend their summers with us and my children. I love London it’s a vibrant and buzzing city and what I like most is the complete anonymity that one can have there, no one knows you and that is extremely liberating.

RG-You are very active in your work with various charitable trusts set up by your distinguished father- please share with our readers about some of the projects the trusts undertakes and what are the causes that are the closest to your heart which you advocate with gusto in Rajasthan?

PRINCESS: Yes I am closely connected to the many family Trusts. At the moment we are carrying out an audit of our archives and right now we are in the process of digitizing the thousands of files from the time of my great grandfather Maharaja Ganga Singhji. We are also planning on adding a new wing to our Sadul Museum as we have more objects of interest in the stores than we can display in the current museum. I would love for the cities of Rajasthan to clean them up it would add much to their attraction quotient. They also have to start adopting a no plastic policy to keep the environment safe from pollution and lastly as a state that often suffers from drought water conservation schemes which are critically important both for humans and animals alike.

RG- Rajyashree ji, you are said to be an ardent admirer of art and architecture and are actively involved in the preservation of ancestral forts, palaces and cenotaphs in Bikaner- how mammoth a task is this and what is its significance according to you to be a part of this preservation drive for the benefit of generations to come both in the family and for public to see and learn from in terms of a city’s rich heritage?

PRINCESS: It’s a mammoth never ending task the old Fort is over five centuries old and our Palace is also over a hundred years old, Both these properties need constant maintenance extensive repairs and renovations and since part of the palace operates as a hotel it needs constant upgrading of rooms and common areas. It takes up much of our time.

RG-Being a winner of prestigious Arjuna Award in 1969 at a young age of 16- did you ever consider a full time career in sport? What principles of sport do you use in daily life over the years? Do you enjoy any sport currently- watching or playing?

PRINCESS: It was a great honour to be awarded the Arjuna Award like my father. I was started off with my shooting when I was al of six years old so in the end I had had enough and I gave it up on a high with no regrets. Through our Trusts we work closely with the sportsmen and women of the former Bikaner state and it’s very encouraging to see woman taking up sports such as boxing, wrestling and weight lifting which traditionally have been viewed as in the male domain. I don’t actively participate in sports but I do enjoy watching all the major events such as Wimbledon and the Commonwealth Games and the Olympics.

PRINCESS: I would say to them to keep a journal and record their thoughts as it is not always easy to recall details or names and other important data. The computer is an enormously important tool in which one can store data and refer to it as and when required. I wish all budding authors the best of luck, as they say each of us has an interesting story to tell.

Princess Rajyashree Kumari Bikaner is the daughter of Dr Karni Singh, Maharaja of Bikaner. She holds the unique distinction of having won the National Air Rifle Championship at seven years of age. She was also awarded the prestigious Arjuna Award in 1969 at the age of sixteen. Her great-grandfather, Maharaja Ganga Singh, was a great reformer, builder and an international figure of his time. Her grandfather, Maharaja Sadul Singh, was the first prince to accede his state into the Indian Union during Independence, providing a pivotal historic lead to other princely states to follow suit, which led to the creation of a united India.

The princess is the Chairperson of the Maharaja Ganga Singhji Trust as well as of four other public charitable trusts set up by the late Maharaja Dr Karni Singh. She founded a public charitable trust in 1999, the Maharaja Dr Karni Singhji Memorial Foundation. The trusts are charged with distributing funds for activities across a wide range of fields such as health and medicine, sports and culture.

She is a life member of the Indian National Trust for Art and Cultural Heritage (INTACH), as well as a passionate animal lover and member of the People for the Ethical Treatment of Animals (PETA), India.