For the last three decades, the name Chokhi Dhani has been synonymous with the championing of local Indian culture and hospitality. Now this legendary brand has created waves in UK too by bringing something totally new to London’s fine dining scene. Vishnu Natarajan, Head Chef, talks to Asian Lite columnist Richa Grover

Chokhi Dhani London, located in the heart of Battersea, showcases the fine food, vibrant atmosphere and exceptional service that entrance all who visit its venues in Rajasthan – but with a contemporary twist to reflect its position in arguably the world’s most cosmopolitan capital. As well as highlighting dishes from this ancient princely state, with its widely revered royal cuisine, Chokhi Dhani London features dishes from across the subcontinent with textures and flavours that guarantee an immersive and multi-sensory experience.

Is the restaurant a branch of the Chokhi Dhani in Rajasthan, India? Was it big shoes to fill to be the head chef of an already established brand name and therefore diners come with set expectations perhaps?

Yes, it is the first international outpost for Rajasthan-based hospitality group Chokhi Dhani. As you say we have a lot resting on our shoulders as Chokhi Dhani is such a celebrated brand across India, both for its hospitality and curation of ancient folk arts. People who have visited us in India will know the high standards and specialised food offerings that together create a whole new level of experience. To execute food with such set expectations but with a London twist is an amazing challenge.

Your menu is varied and diverse – where does your menu get its inspiration from? How and why did you diversify your menu when Chokhi Dhani already has a regional menu that you could have replicated?

We could easily have copied what has been such a success in India. However Chokhi Dhani’s owners graciously allowed us to diversify a bit more. The underlying subtle South Indian flavour notes of my own roots is also an influence, as is the availability of varied seasonal ingredients, especially in London. It was a great chance to create a slightly lighter and healthier take on the brand’s original menu.

Do you have specials and seasonal dishes or is there always a fixed menu at your restaurant?

Our menu celebrates all four seasons. It gives us an opportunity to offer the best of nature’s produce, much of it sourced locally, with as little processing as possible.

Has working in various famous kitchens of big restaurant banners across continents equipped you to be better prepared for heading a kitchen which is an established brand but you felt confident to add innovation to a traditional menu? What’s your favourite dish in your menu that you enjoy cooking the most?

Working for some celebrated names and kitchens in a variety of roles has given me both the inspiration and confidence to put an even more innovative slant on Chokhi Dhani’s core menu. Each dish is a part of me, but if I had to pick favourites these would have to be Paneer Palak and Bamboo Seafood Biryanis together with street foods like Tawa Chicken and Honey Ginger Kulfi bites.

What’s the most popular food on your menu that your diners are coming to the restaurant for?

The traditional Rajasthani Thalis platter consisting of 16 taster dishes. This comes in both vegetarian & non-vegetarian versions, aptly named as Maharani & Maharaja that translates into The Queen & The King.

Foie Gras, ostrich, pulled slow cooked rabbit … these are not very often seen on Indian restaurant menus – how confident were you in showcasing them and how have these been accepted by traditional Indian palates who visit the restaurant?

This is an interesting one, as Indian restaurants are normally associated only with chicken and lamb. India is such a vast country with various communities, regions, natural food resources and climate all affecting the local cuisine. What is popular in one region of India may be totally alien to another. Hunting game and exotic meats has almost become extinct in India, but since these ingredients are readily available here in London, we are reviving some of the old recipes. At the moment we have venison, ostrich and pulled slow cooked rabbit on our menu with crocodile in the pipeline.

Another special ingredient we use is the French delicacy foie gras which we place on a bed of tamarind and chilli and then cook over a charcoal tandoor grill with pumpkin poriyal, blue poppy seeds and cassava papad. 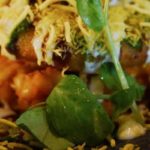 Did you always want to be a chef? What piece of advice and encouragement would you give budding chefs?

My desire to become a chef only kicked in when I missed out on pursuing a career in engineering. Ever since, it has been the fire in my belly. I don’t really have any advice. I would just suggest to any budding chef to not always look at the bottom line financially when you are learning your skills. Also learn about the science behind your cooking. And then the magic will happen.

What can diners expect in terms of the whole experience from Chokhi Dhani London when they visit?

It is a taster of what the Chokhi Dhani brand is offering back in India. Every aspect of the restaurant works hand in hand to create a satisfying whole.

‘Atithi Devo Bava’, says an ancient Hindu scripture meaning ‘Guest is equivalent to God’; which has become the unwritten core principle of Indian culture and hospitality

Tell us about the decor, interiors and creatives of your restaurant – where does all the ambience take its inspiration from?

All our décor, interiors and creative ideas revolve around ethnic Rajasthan. A few to note include the majestic 14 foot high life size bronze elephant weighing almost 2.5 tonnes, handcrafted by Vivek K Agrawal, that greets all our visitors, and the Jaipuri Jarokha that greets them from above. The tables themselves work like mini displays of hand crafted jewellery, an original idea from our Chairman Mr. Gul Vaswani.

Then there is the marble depiction of harem life by Arjun Pajapati, an internationally acclaimed name in the art of sculpture and stone craft who is credited with bringing Rajasthani tradition to an international audience. The mezzanine level is home to an equally arresting piece dedicated to the Hindu festival of Teej.The whole restaurant is the brainchild of extraordinary young chef, hotelier and entrepreneur Kriti Vaswani who is following in footsteps of her father. 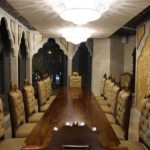 Who has been your biggest supporter in this journey of success of the last two decades in the business of food?

I’m unable to pin-point just one person. It started with my parents, brothers, sisters and now it is the turn of my beautiful wife to bear with me. In addition my fantastic teachers and countless gurus all helped to create what I am today. I have also learnt so much from colleagues, peers and even from juniors. Learning has no limitations.

How does it make you feel representing Indian heritage while curating the menu and meals in London for a famous brand like Chokhi Dhani?

It is an amazing feeling to be able to offer our customers a true taste of Indian heritage with a difference with our street food menus, Royal Rajasthani selections and overall ambience.

‘Atithi Devo Bava’, says an ancient Hindu scripture meaning ‘Guest is equivalent to God’; which has become the unwritten core principle of Indian culture and hospitality. One that we embody here at Chokhi Dhani London.