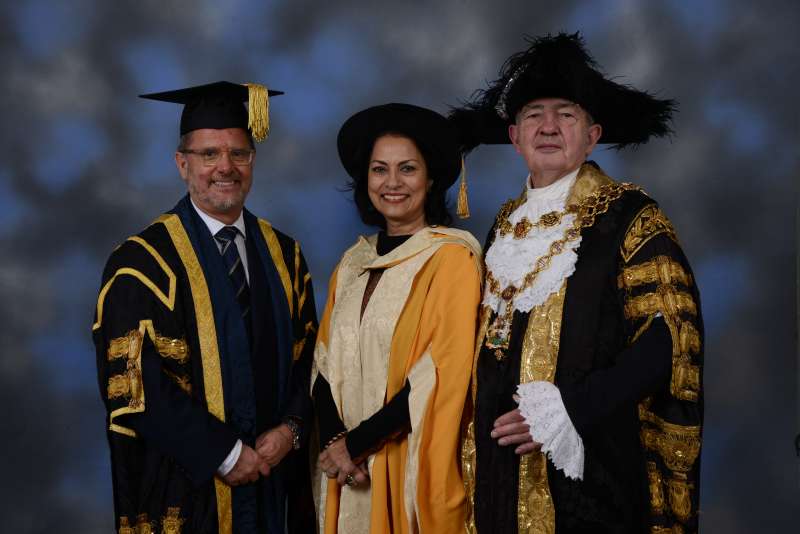 The doctorate was bestowed at Symphony Hall in recognition of her exceptional services to the city of Birmingham and to the University itself, where she was on the Board of Governors for eight years.

On receiving her award, Anita said: “I am absolutely delighted to be receiving this honour from Birmingham City University. I have had the privilege to experience the University both as a student and as a governor. It is a University that is at the heart of a great city and plays its part in our city,  combining this successfully with a national and an international academic reputation. I am proud to be associated with it”.

Anita is perhaps most famous for her 26-year media career with the BBC which saw her take on various roles, including overseeing the national network of Big Screens – that show live relays of major cultural and sporting events – and founding the BBC Asian Network. She has also presented Channel 4’s Eastern Eye and other national programmes.

Anita is currently Chair of Performances Birmingham (Town Hall and Symphony Hall) and was previously Chair of mac (Birmingham). She is also the Chair of the Creative City Partnership, an initiative of the Birmingham and Solihull Local Enterprise Partnership, which was set up to support the creation of jobs and wealth in Greater Birmingham. In 2009 she was awarded an OBE for her services to Broadcasting and Communities.

As a trained teacher, Anita began her career as a Community Relations Officer in Leicester and a community worker in Birmingham, where she set up and ran one of the first hostels for Asian women, as well as dealing with wider issues around welfare and social care. She has also worked as a lecturer teaching language and employment skills to industrial workers, alongside training their managers in effective communications.

Anita has a strong commitment to public service and her portfolio in this area ranges from being a member of Birmingham’s recent Social Inclusion Commission and a current trustee of the Children’s University, to being a past chair of Grestone Junior and Infant School. Between 2010 and 2011, Anita held the Office of High Sheriff of the West Midlands and at present she is also a Deputy Lieutenant of the West Midlands. Anita is also an alumna of the University.