Mrs. Anuradha Prabhudesai, one of the pillars of “Lakshya foundation,” will pay tribute to Kargil martyrs at an event in Manchester on Saturday – 10th December….reports Asian Lite News

“Junoon shaheedonka, jazba Kargil ka”….Hear about bravery of Indian Army during the Kargil War.. The VOICE (Vedic Organisation for Indian Culture and Education) and North West Marathi Association jointly hosting an inspirational and patriotic audio visual presentation depicting the selfless acts of bravery of the Indian Army soldiers during the Kargil war – “Junoon shaheedonka, jazba Kargil ka” on Saturday Dec.10 at 11 am at Gita Bhavan mandir in Manchester.

The talk will be given by hugely inspirational Mrs. 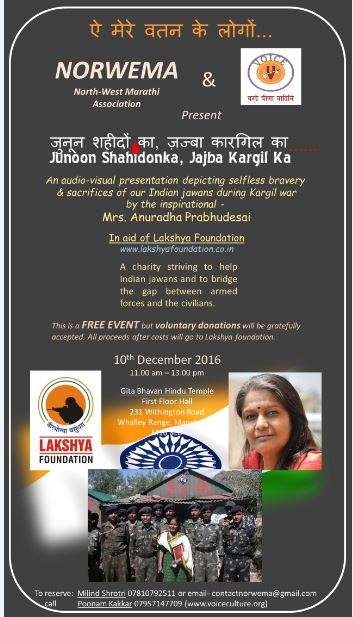 Anuradha Prabhudesai, one of the pillars of “Lakshya foundation,” which was set up to help our jawans fighting tirelessly on the borders in difficult terrains and harsh weather conditions, cut off from their families and friends for long stretches of time. Mrs. Prabhudesai has visited these terrains many times.

She has given many talks throughout India to bring the stories of their bravery alive and to bridge the gap between soldiers and civilians. Her TED talks have been hugely popular. Lakshya foundation runs several initiatives to help the jawans and their families.

Her talk in Manchester is a part of her UK tour and we are indeed honoured to be able to welcome her on Saturday the 10th of December, from 11am onwards at the Gita Bhavan temple. The 90 minutes presentation will be followed by a short question and answer session, concluding at 1pm.

It’s a not to miss opportunity to listen to this inspirational speaker about a topic close to several Indan hearts. The talk is in the hall on the first floor of Gita Bhavan. Reservation is essential as there is limited seating. It is a FREE EVENT but voluntary donation will be appreciated as all proceeds after costs will be donated to Lakshya Foundation.