The last empress of Music, Asha Bhonsle will be in UK for her much awaited and rightfully  hyped Farewell Tour presented by Stardust on September 18 ….writes Richa Grover

Legendary Indian singer Asha Bhosle will be live in concert with top musicians and supporting vocalists on 17th September in Birmingham and the stage is all set for her in London’s Wembley arena on 18th September 2016.
Fondly referred to as Asha Ji, she is the undeniably the icon of the Indian music scene. She has been officially acknowledged by the Guinness book of world records as the most recorded artist in the music industry. She’s been the recipient of the prestigious Govt of India award, Padam Vibhushan, in 2008 for her excellence and unparalleled contribution to Music.
She has 13000 songs, across every genre amassed in her body of work thus far and it will be a pleasant surprise for the Uk audiences to see what songs she will choose to showcase at this ‘can’t-wait-for-it’ concert of the year.
Asha Bhonsle, credited highly for her versatility and musical abilities has a repertoire of work that includes genres of pop, film music, Bhajans, folk songs, qawallis, Hindustani classical, ghazals and Rabindra Sangeet. Apart from Hindi she has sung in over 20 Indian and foreign languages.
British alternate rock band Cornershop released ‘Brimful of Asha’ in 1997 and this song dedicated to Bhonsle became an international hit single and topped the UK charts then. In 1997 Asha Ji was the first Indian singer to be nominated for the Grammy award.
Her contribution to the Hindi film industry spanning over seven  decades is worthy of a huge tribute and fans across age groups will be seen in audience in the upcoming UK concerts as they gearing up to experience the magic of Asha Ji Live. 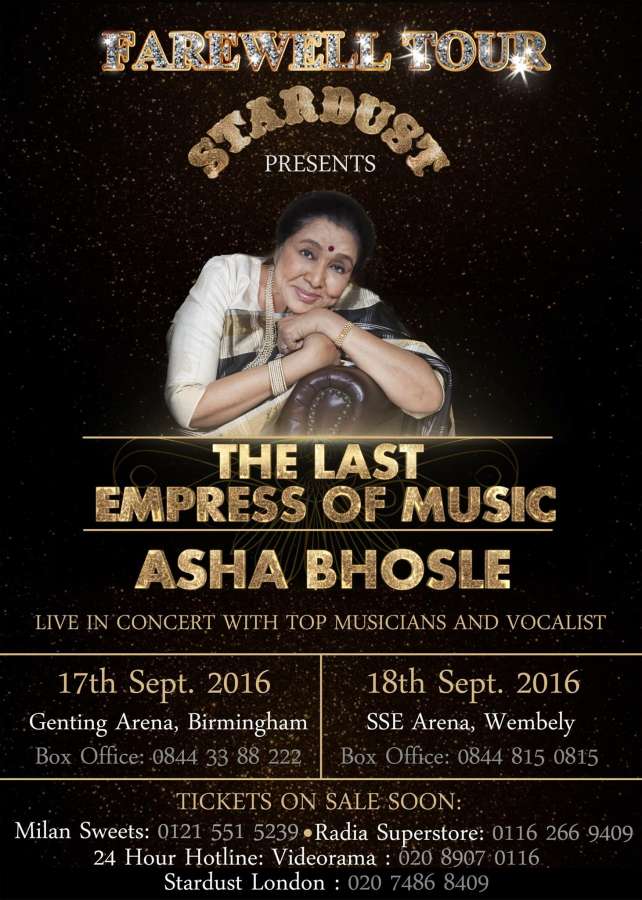