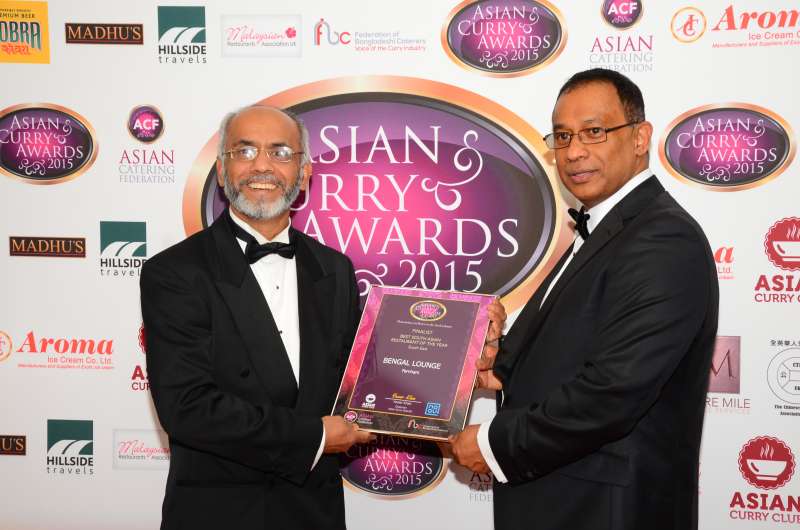 Over 800 leading Asian restaurateurs, VIPs and embassy dignitaries and celebrities gathered for a glittering gala dinner at the London Hilton to honour the winners of Asian Curry Awards 2015. The awards are a joint venture organised by the Asian Catering Federation and the Federation of Bangladeshi Caterers.

Designed to recognise excellence in the Asian catering industry, the awards encourage positive competition towards ever higher standards in the industry. In association with NOQU and the Asian Curry Club, the 5th Asian Curry Awards 2015 was hosted by TV presenter and Strictly Come Dancing winner, Natasha Kaplinsky.

The evening’s entertainment included the spectacular Shiamak’s dance troupe and the renowned musician Shahid Abbas Khan. Guests were treated to an exquisite menu from the award-winning caterers, Madhu’s caterers of Southall, London.

In his keynote speech, the Asian Curry Awards’ Chairman Yawar Khan described the event as a “truly momentous occasion” and reported that this year’s awards had attracted record numbers of public nominations.

Standing in for Pat Chapman, editor of the Cobra Good Curry Guide and chairman of the awards’ judging panel, who was unable to attend, fellow judge George Shaw reported “a strong industry trend towards more high quality, authentic, regional dishes, with a modern gastronomic twist and healthier, light options on menus.”

The accolades for Best Thai went to Giggling Squid in Bristol (South West) and Lemongrass in Crawley (South East).