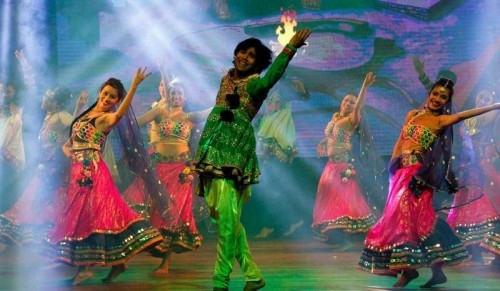 B4U Music has announced that they are the official music partners for the brand new west-end musical ‘Beyond Bollywood’ making its UK Premiere at the London Palladium.

Witness the colour, energy and sheer exuberance of Bollywood as a new musical explodes onto the West End stage this May direct from sell out performances in Mumbai. Beyond Bollywood takes audiences on a truly authentic cultural tour of India capturing the fire, heat and desire of Indian dance.

Beyond Bollywood is not just a musical; it’s a theatrical experience never seen before outside a Bollywood movie. The show premiered in Mumbai, India in the summer of 2014 and has garnered tremendous appreciation ever since.

Written, choreographed and directed by Rajeev Goswami, with lyrics by Irfan Siddiqui and featuring an original score by Salim-Sulaiman, the very best of Bollywood’s creative talent bring this spectacular event to life for 60 performances only.

As one of the leaders in Bollywood entertainment, B4U Music is thrilled to be a part of Beyond Bollywood in breaking boundaries and bringing the magic of Indian film to the London Palladium.

B4U Music will be airing the show’s official music video ‘Namaste India’ to give viewers a taster of what to expect from the musical as well as exclusive interviews with the director and composers.