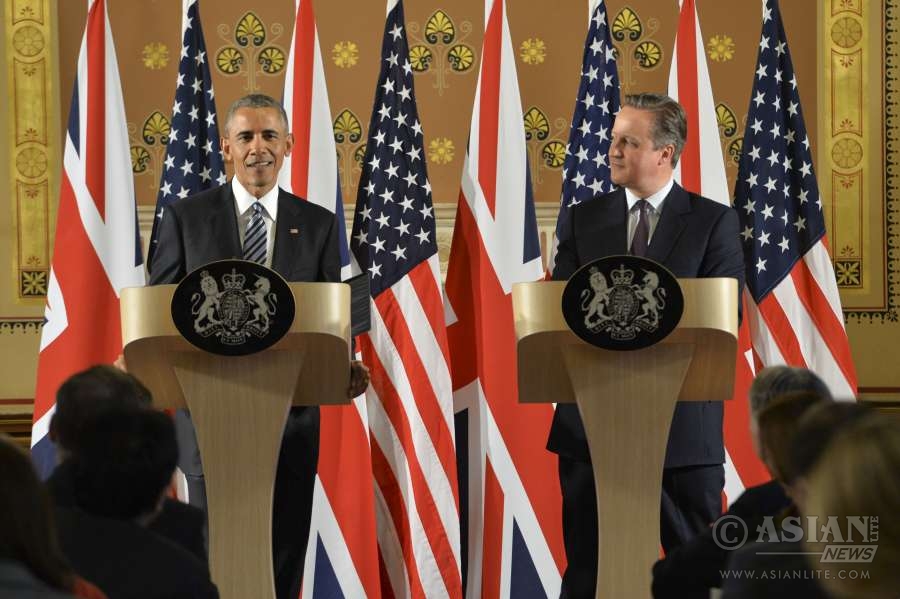 Visiting US President Barack Obama set the EU referendum debate alight on Friday with a warning that Britain would “go to the back of the queue” to strike a trade deal with the US if the Brexit vote wins the June 23 referendum.

Standing alongside British Prime Minister David Cameron at the Foreign Office in London, Obama spoke of the impact of an “out” vote in Britain’s national referendum on continued membership of the European Union.

Hours earlier, Obama said in a message that he was speaking as “with candor as a friend of Britain”.

His joint press conference with Cameron hours later sparked a frenzy among politicians, campaigners and commentators.

Obama said: “I think it’s fair to say that maybe some point down the line there might be a UK-U.S. trade agreement, but it’s not going to happen any time soon because our focus is in negotiating with a big bloc, the European Union, to get a trade agreement done. The UK is going to be in the back of the queue.”

Cameron welcomed the president’s trade warning as a big moment in the debate, describing it “a clear statement.”

Some analysts even suggested that the words “had been written for Obama” as Americans use the word “line” instead of “queue”. The suggestion was that Obama was doing the bidding for the pro-Cameron stance to vote yes on June 23.

Some Brexit supporter accused the US president of being guilty of “wanton double-standards”,saying that he was asking the British people to do something he wouldn’t dream of asking Americans.

Ahead of the press conference, Obama and Cameron held private talks on a number of issues, including economy and the Middle East.

Emerging after the private talks to face the media, Obama said the special U.S.-British relationship is solid and will continue – – “hopefully eternally” even if Britain votes to leave the EU, adding that he had not journeyed to Britain to “fix votes”.

But he also added that leaving the EU would not be in Britain’s economic interests.

Obama said: “If, right now, I have got access to a massive market where I sell 44 percent of my exports and now I’m thinking about leaving the organisation that gives me access to that market and that is responsible for millions of jobs in my country and responsible for an enormous amount of commerce and upon which a lot of businesses depend — that’s not something I would probably do.”