Prof.  Rajan Madhok, Chairman of the British Association of Physicians of Indian Origin (BAPIO), is joining a campaign to save the crisis-hit National health Services (NHS).

Prof. Rajan will join the ‘999 Call for the NHS’ campaign by a group of mothers from Darlington. They are walking from Jarrow to London covering 300 miles seeking support to the campaign.

The campaigners are opposing  the “privatisation” of the NHS besides the move to impose a fee for availing NHS services.

The march, dubbed The 999 Call for the NHS, will set off in August 16, the International Mother’s Day, from Jarrow on the banks of the River Tyne and finish at the houses of parliament, planning to arrive just in time for prime minister’s questions on 6 September.

“If these Darlington mums can do it, why not us,” Prof. Rajan said. “Come on, it is good for the NHS, the soul, and the body – all that exercise!

“Leading up to 2015 elections we have an opportunity to create a new form of governance (if not government) and force a cross-party unified approach to the NHS (and not the political football); no future government should be allowed to renege on their promises – remember there will be no top down reorganisation of the NHS! If these Darlington mums can do it, why not us. ”

The campaign is getting inspiration from the famous 1936 Jarrow crusade in which 207 men from the north-eastern town marched 300 miles to London seeking jobs and development. ‘999 Call for the NHS’ following the footsteps of the Jarrow marchers and will stay interact with politicians and public through out 23 towns and cities in the route.

” I am not happy with the way things are in the NHS,” Prof Rajan told Asian Lite. “Midstaffs scandal and the recent treatment of whistle-blowers, for example, are a manifestation of the deeper underlying problems of pursuit of ideology despite mounting evidence to the contrary, abuse of power, and loss of direction and accountability, and are an affront to our values of dignity, respect and fairness.

“When coupled with the Health and Social Care Act, the PFI initiative and obsessive introductions of markets (just to make it clear I am not totally against markets/choice) it seems to me that the NHS I chose may not be there for much longer, unless we act. I am not making any political points because in my experience since Thatcher introduced ‘Internal Markets’ in the late 1980s, the direction of travel has been maintained and recently accelerated. In fact, political parties so far have tended to abuse the NHS when in power and use it in opposition. We need to put a stop to it- for our sake and the sake of future generations. Just when the NHS is seen as the best health system in the developed world we seem hell bent to destroy it – why?

“Remember that saying attributed to Edmund Burke: “All that is necessary for the triumph of evil is that good men do nothing”. And to use another one: “If not now, then when; and if not you, then who?” We need to rise to the challenge and do whatever we can to save this cherished institution. Whether it  will make a difference is not the issue for me. I do not need to be reminded that millions marched against Iraq War but Tony Blair forced it through. That only confirms that people get the governments they deserve, and to quote Churchill: “It has been said that democracy is the worst form of government except all the others  that have been tried”.

Follow Prof. Rajan on   @R_Madhok and more details about the march on http://999callfornhs.org.uk/ 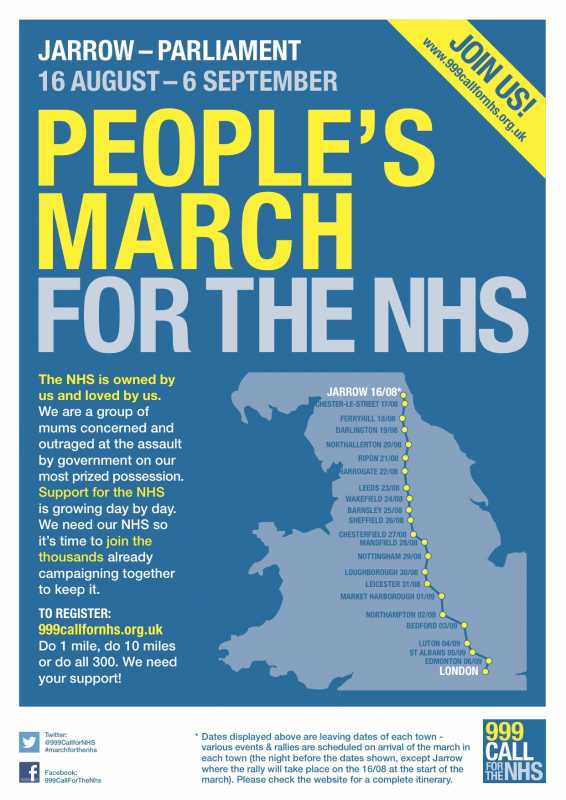