The Aviation Minister, Baroness Sugg, has rounded off Manchester Airport’s 80th birthday celebrations by checking in on the progress of its £1bn Transformation Programme… reports Asian Lite News

The Minister was given a glimpse of the airport’s future by standing inside the first pier that will connect to the new “super terminal” as a result of the project, which is the largest private sector investment in the North.

Work started on site just under 12 months ago, with the first features set to go live by the end of this year and the enlarged terminal itself being delivered by 2020.

She also met some of the industry’s future workforce, by visiting a careers “masterclass’ held by Manchester Airport for more than 100 students from 10 different schools and colleges across the region

Staged in partnership with Vodafone, Laing O’Rourke and Carat Media, it aimed to showcase the range of tech-related careers young people can pursue in aviation and give them practical advice about how to access them.

The visit came on the back of the Government re-iterating its support for making best use of all UK airports, particularly those with spare capacity, like Manchester.

Aviation Minister, Baroness Sugg, said: “Manchester Airport is an international success story and it is fantastic to play a part in its 80th birthday celebrations.

“This Government is committed to ensuring that the North gets the connectivity it needs and that airports like Manchester play an important role in boosting the economy through jobs and businesses opportunities. 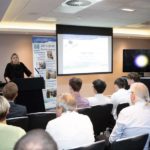 “I expect growth at the airport to continue, building on its £1bn investment and achievements including securing routes to more than 220 global destinations.

“And I welcome their commitment to inspiring young people to pursue tech-related careers, which sits at the heart of our Year of Engineering campaign.”

The Minister visited Manchester Airport at the end of a week of celebrations to mark its 80th birthday. The week started with the unveiling of a striking video and poem, produced in partnership with Mancuniuan poet Tony Walsh. It featured memories from passengers and airport colleagues and projected a vision for the future via the MANTP scheme.

The project began on site almost a year ago and will see Terminal 2 more than double in size, as well as new piers constructed and a range of other improvements made to the customer experience at Manchester.

Baroness Sugg was given an overview of the scheme and tour of the construction site by Manchester Airport CEO Andrew Cowan.

He said: “Baroness Sugg’s visit is extremely timely, as it comes in a week when we are celebrating the part Manchester Airport has played in the lives of those living and working here for eight decades, as well as its pivotal role in driving growth across the North and rebalancing the UK economy.

“Having grown our route network to offer services to the likes of Beijing, Hong Kong, Singapore, San Francisco and Boston, as well as announcing routes to Mumbai and Addis Ababa in recent weeks, it is clear Manchester has the potential to connect our country to the world’s most important markets at a time when these links are more important than ever before.

“Through our 1bn Transformation Programme, we are investing in the growth of the airport, the North and the UK as a whole and that is why it was pleasing to hear this week that Government is committed to maximising the potential of airports like Manchester.

“We look forward to working with Baroness Sugg and her team to develop plans to do just that in the months and years ahead.”

During her visit, the Minister gave the closing speech at the tech masterclass, emphasising the wide range of careers available in the aviation sector.

The session is part of a year-long programme of careers events for teenagers planning their next steps, giving them advice from the business world about the right path to take, whether that be apprenticeships, university or something else.