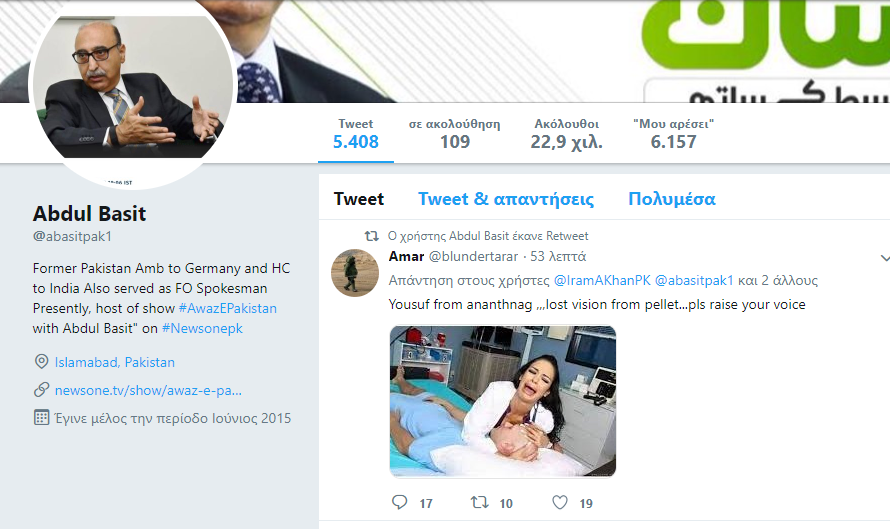 In an embarrassing gaffe, former Pakistani High Commissioner to India, Abdul Basit, retweeted the picture of an adult movie star, mistaking him to be a Kashmiri protester who lost his vision due to pellet injury.

The ex-envoy’s tweet became the centre of jokes after being highlighted by Pakistan-based journalist Naila Inayat who posted screenshots of Basit retweeting the post on Twitter.

The Twitter screenshots that Inayat had shared showed Basit retweeting a tweet with a picture and a message: “Yousuf from Ananthnag…lost vision due from pellet…pls raise your voice.”

Meanwhile, Naila’s tweet went viral and has been retweeted as well as circulated widely across social media and has garnered over 10,000 likes so far.

Meanwhile, another report says that the government is contemplating legal action against media outlets for reporting fabricated and baseless news relating to developments in Jammu and Kashmir.

Highly placed sources in the Ministry of Home Affairs said that legal notices could be served to media outlets if they are prima facie found projecting “fabricated and provocative” stories, leading to disturbance in the law and order situation in the sensitive Valley region of Jammu and Kashmir.

Attributing “facts” to foreign news agencies, a few local media outlets including a prominent English news website, have claimed that Valley has been witness to a large scale protest and violence on Friday.

The media outlets, quoting a foreign TV news channel have said that police resorted to pellet gun attacks, injuring several local residents in Srinagar. However, Jammu and Kashmir Police denied any such attacks or firing by the security forces.

Earlier, prominent Pakistan news daily Dawn went to the extent of claiming that over 10,000 people have gathered in Srinagar staging a protest over revocation of special status granted to Jammu and Kashmir.

Subsequently, one of the news websites based in New Delhi quoted Dawn, in its apparent bid to project a scary picture of a worsening law and order situation in the Valley.

The Ministry of Home Affairs then issued a statement that “news report originally published in Reuters and appeared in Dawn claims that there was a protest involving 10,000 people in Srinagar. This is completely fabricated and incorrect. There have been stray protest in Srinagar/Baramulla and none involved a crowd of more than 20 people”.

Such fabricated news also appeared in social media which eventually led to rumour mongering in some pockets in Jammu and Kashmir where communication was partially restored for sometime.

Later, Inspector General of Police, Kashmir, Swayam Prakash Pani, appealed to the media to desist from publishing news based on wrong facts and urged them to act responsibly. The IGP also assured the media that law and order situation was largely peaceful in the valley for the past one week.