Diwali, the festival of lights, finally arrives at one of the prestigious landmark in the Midlands. Consulate General of India (CGI) joined forces with the West Midlands Combined Authority (WMCA) to hold the spectacular annual event ‘Diwali on the Square 2018’ at the landmark Victoria Square of Birmingham. The occasion was graced by Consul General of India Dr. Aman Puri and Mayor Andy Street

The spectacular Diwali celebrations at Victoria Square witnessed around 15,000 visitors from across Midlands and North England, who thronged the square to enjoy the live music and dance, delectable food and various other activities. There were a varied mixture of Indian dance performances courtesy Asian arts organisation Sampad, The Hindu Council of UK and dance troupe Gabhru Punjab De. There was an educative yoga performance led by the Teacher of Indian Culture from the CGI However, the main cultural element of the event was a two-hour entertaining musical extravaganza by Punjabi singer Malkit Singh and his troupe. Malkit Singh was in his elements as he entertained the audience in his home town.

Various stalls put up for the occasion, ranging from Indian art and culture, to cuisine and informative stalls sparked the interest of the visitors. The stalls included Incredible India, WMCA, West Midlands Metro, India Institute of University of Birmingham, West Midlands Police, Soho Bid and many others, along with food stall by Asha’s restaurant. As a gesture of goodwill, different faith organisations came together to distribute around 10,000 Diwali sweets. 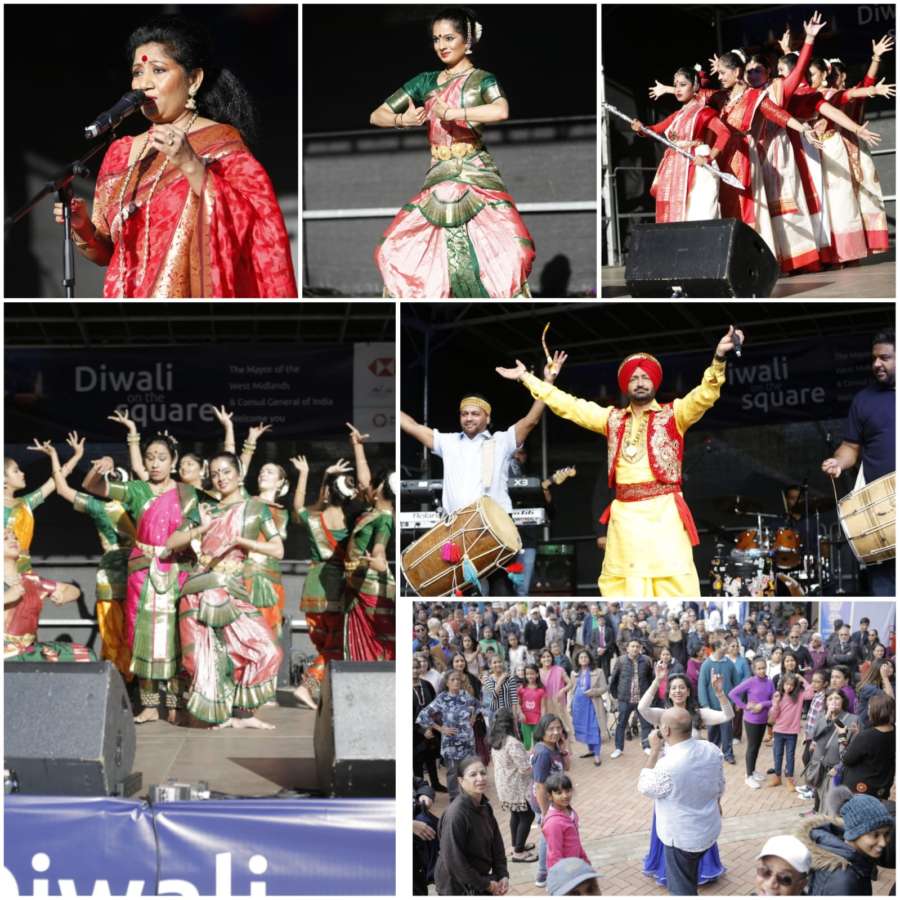 Consul General of India Dr. Aman Puri congratulated Mayor Andy Street for bringing immense dynamism to the region, for bringing communities together, and for connecting West Midlands to the world. He expressed his happiness that the event for the second year has become an immense success. Dr. Puri commended the Indian community for bringing Midlands closer to India. Consul General mentioned how Diwali was celebrated in Mughal times by successive emperors, starting from the time of Akbar. The Rang Mahal of Red Fort in Delhi was the venue for Royal celebrations of Jashn-e-Chiraghan or ‘Festival of Lights’. He also spoke about Chandni Chowk of Old Delhi where the religious integration was exemplified by Hindu families laying down the diyas, Sikhs from Gurudwara Sisganj contributing the oil, and the Muslims providing the cotton (batti).

He asserted that Diwali has always been a unifier of all religions. Birmingham has created its own version of Chandni Chowk where 10,000 Diwali sweets were gifted to visitors. The Consul General complimented the faith institutions, Balaji Temple, Geeta Bhawan, Ramgharia Sikh Temple, Nirankari Bhawan and others who came forward to celebrate the age-old tradition by preparing and distributing 10,000 sweet packets to the visitors in the true spirit of togetherness. He specially thanked Ms. Piali Ray, Director Sampad for curating and organising an amazing range of cultural performances and star performer ‘Malkit Singh’ who has been awarded an MBE by Her Majesty, the Queen of United Kingdom. Consul General also thanked various organisations without whose support this event would not have been possible, especially HSBC, SBI, West Midlands Metro, Asha’s, TSB, ICICI, Birmingham Airport, KTC, O2 and Air India.

Mayor Andy Street thanked the Consul General and the Consulate for their efforts to make the event a success, and hoped that Diwali celebrations would continue as an annual feature in Birmingham.  He made special mention about the trade delegation to India, which he had organised in October this year, which is a step towards strengthening the India-UK relationship. Minister (Coordination), High Commission of India, Mr. A.S. Rajan conveyed Diwali greeting to the visitors and spoke on the essence of Diwali as a message of togetherness, of light and of happiness. He congratulated the Mayor & Consul General for organising the celebration.

The joint celebration by the CGI Birmingham and WMCA was a huge success, and is now slated to become an annual event in the cultural calendar of Birmingham.