With the Bihar election result coming as a setback for the BJP, Prime Minister Narendra Modi’s public interaction with the Indian diaspora in Britain at Wembley Stadium, the internationally renowned sporting arena in London, on November 13 has come under a shadow if one goes by what the British media is saying.

After Madison Square Garden in New York, Allphones Arena in Sydney, Ricoh Colisuem in Toronto, the Dubai Cricket Stadium in Dubai and the SAP Center in San Jose, California, Prime Minister Narendra Modi will be holding his by now trademark public interactions with the Indian diaspora at the iconic stadium on the second day of his visit to Britain this month.

“The result means that as he prepares for an enthusiastic welcome ion Britain this week – including an unprecedented sell-out event at Wembley Stadium on Friday – Mr. Modi will be smarting from the defeat on home soil, which comes as his administration also faces mounting accusations of fomenting intolerance,” The Independent reported in an article headlined “India’s prime minister Narendra Modi suffers embarrassing setback on eve of UK visit”.

It also pointed out that it was Modi himself who took personal control of the election campaign in the east India state.

“Instead of relying on local BJKP leaders to fight the election on local issues, Mr. Mod, a sharply dressed and highly skilled orator, took personal control of the campaign in the hope that his reputation and charisma would seal victory,” the daily stated.

In an article headlined “Narendra Modi suffers major electoral setback on eve of London visit”, The Telegraph daily stated: “The defeat will embolden his opposition and dampen the mood as he heads to London for a visit that will include a sold-out rally with British-Indians at Wembley Stadium, lunch with the Queen at Buckingham Palace and an overnight stay at Chequers hosted by (British Priume Minister) David Cameron.”

It also pointed out that this was Modi’s second successive defeat in a major provinccial election.  “It came as scores of leading Indian writers, artists, film-makers and scientists returned prestigious national awards in protest in protest at what they have called a ‘cultural intolerance’ under Mr. Modi’s government and attacks on minorities,” The Telegraph article stated.

According to the Finacial Times, Modi’s Britain visit will be overshadowed by deepening troubles at home.

“Since he swept to power 18 months ago, Indian Prime Minister Narendra Modi has proved to be a charismatic international statesman, impressing leaders from Shinzo Abe to Barack Obama as well as expatriate Indians with his ambition to modernise India,” it stated.

“But his next foreign visit – to the UK this week to meet David Cameron and the Queen and to to address a crowd of 60,000 British Indians at Wembley Stadium – will for the first time be overshadowed by deepening troubles at home.”

The event on November 13 is going to be the biggest such gathering that Modi will address with the organisers, Europe India Forum, expecting the stadium to seat over 70,000 people of Indian origin – surpassing the gathering of around 50,000 at the Dubai Cricket Stadium on August 17 this year.

“People-to-people ties are crucial for every bilateral relationship to grow,” he wrote. “Lakhs of professionals and students are also working and studying in Britain. We want to deepen the bond between our diaspora and the people of India.” Because of the colonial connection, links between the people of the two countries have existed for well over two centuries now.

Today there is a vibrant and influential Indian community in Britain living an active socio-cultural life with a plethora of ethnic organisations maintaining Indian culture and values.

In the British general elections held in May this year, a record number of 10 Indian-origin candidates were elected. Now, the Indian festival of Diwali is celebrated every year at 10, Downing Street.

But whatever the scale of success or however big the fame, British Indians have always maintained strong connections with their motherland.

A major factor for this is the popularity of Bollywood movies and the existence of a vibrant ethnic Indian media. A number publications of various frequencies and radio and TV stations not only keep British Indians connected to India but also between themselves.

Given last year’s general elections in India which made headlines worldwide with Modi becoming prime minister and now the Bihar election that has come as a shocker to the BJP, one can only wait and watch when Modi takes the stage in the “Olympics style” invitation-only event at Wembley on November 13 afternoon in the the largest reception given to a foreign leader on British soil. 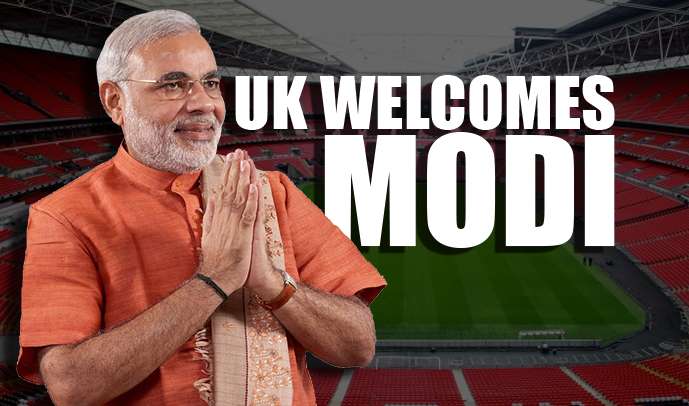