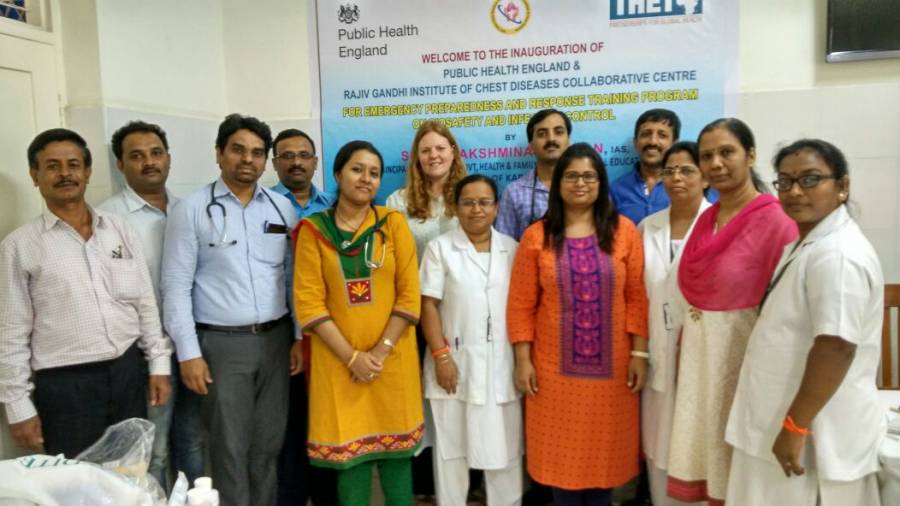 The Collaborative Centre has successfully conducted its first bio safety training programme with PHE trainers, as a first-of- its-kind national pilot, to strengthen EPR capabilities around airport hubs. RGICD is the nodal institution in Karnataka for isolation, treatment and management of cases during epidemics and pandemics such as Ebola, and is working with PHE to have highly trained healthcare workforce during public health emergencies. The Collaborative Centre, which was inaugurated last year by PHE’s Chief Executive Duncan Selbie and Karnataka’s Principal Secretary for Health and Family Welfare (Medical Education) M. Lakshminarayan, IAS, has now become operational.

Speaking on the sidelines of the UK-India BioConclave 2016 in London, PHE’s senior business development manager and co-investigator of the emergency preparedness and response collaborating centre, Professor S.S. Vasan said: “When patients and patient samples are handled within the hospital and laboratory environments without initial knowledge of the causative pathogen, it is important to minimise the risk of personal infection to healthcare workers, their colleagues, friends and family members. Our project, funded by the UK Tropical Health & Education Trust and the Department for International Development, will allow PHE to work with RGICD Bengaluru, share experiences and best practices, as well as contribute to classroom and laboratory training to be delivered by our Indian partners.”

A one-day course has been conducted for support staff such as ambulance drivers and cleaners, while doctors, nurses and diagnostic technicians attended an intensive four-day course, including hands-on training working with a “flexible-film isolator” supervised by Dr Jane Shallcross and Dr Suzanna Hawkey from PHE’s Novel and Dangerous Pathogens Training Unit.

In a video message from New Delhi, PHE’s CEO Duncan Selbie, had said: “It is the beginning of the next stage of our collaboration with the Rajiv Gandhi Institute of Chest Diseases (RGICD) in Bengaluru, and other institutions like it with world-class status, on important topics such as bio safety and tuberculosis. It is fabulous to see the first programme getting underway in the PHE-RGICD Collaborating Centre for Emergency Preparedness and Response which I inaugurated in September 2015. We hope to share the experiences that we have had from working on Ebola in West Africa.”

Director of the Rajiv Gandhi Institute of Chest Diseases (RGICD) Bengaluru Dr Shashidhar Buggi, who is the lead Indian investigator of the emergency preparedness and response project said: “World class infection prevention and control measures are vital to protect both clinical and laboratory staff when dealing with either unknown threat agents or those that are highly transmissible. We believe that our partnership with PHE, which is a pioneer in bio safety and bio security, will further strengthen our preparedness and response capabilities. PHE built and commissioned the first BSL4 facilities in the world in 1976, designed the world’s first Class III safety cabinets, and used them to co-discover and characterise the Ebola virus, so their experience and expertise will be highly valued in India.”

When asked whether other cities will also benefit, Professor Vasan said: “We very much hope this pilot can be converted into self-sustaining training opportunities for global cities and airport hubs in partnership with the BMJ. The next batch of training programmes will take place in December at RGICD and JIPMER Puducherry for stakeholders in Bengaluru and Chennai metropolitan regions respectively.”

In addition to bio safety, RGICD has also exchanged a collaboration agreement with PHE on TB, with JIPMER Puducherry and AIIMS New Delhi as additional partners. “PHE is working on more sensitive biomarker-based ‘point of care’ diagnostic tests for TB, which could deliver a rapid turnaround to diagnosis (30 minutes) from a pin-prick of blood. We are working closely with RGICD Bengaluru, JIPMER Puducherry and AIIMS New Delhi, to develop and exemplify our tests in the field. Existing diagnostic tests are somewhat insensitive and are also unable to distinguish between active and latent TB. Improved diagnosis, including stratification of patients more likely to progress to active disease, would limit spread and improve patient care”, Dr Vasan added.

Rapid strides made in India with UK collaboration