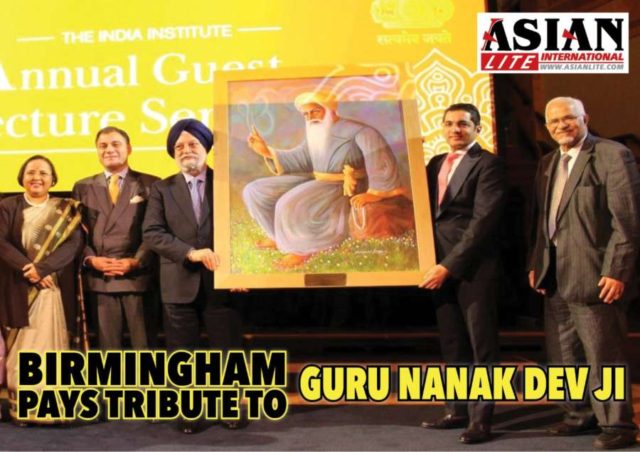 University of Birmingham in England becomes the first university in Europe to create Guru Nanak Chair to pay tributes to the founder of Sikhism on his 550th birth anniversary. The Chair was launched at a grand ceremony held at Great Hall of the University in the presence of  Indian Union Minister Hardeep Singh Puri, senior diplomats and prominent people from the Indian community …. Reports Asian Lite News

A joint effort by the Consulate of Birmingham and an Indian-origin Chancellor put the manufacturing hub of Britain to a unique position in the map of global Indian diaspora. The city has become the first in Europe to have a Chair to honour Sri Guru Nanak Dev Ji, the revered first Sikh Guru.

At a grand ceremony organised by the University of Birmingham and Consulate of India at Great Hall of the University. India‟s Union Minister Mr Hardeep Singh Puri formally announced the launch of the Guru Nanak Chair. The Government of India is supporting the initiative as part of the 550th birth anniversary celebrations of Sri Guru Nanak Dev Ji.

This academic Chair will promote research into the life and philosophy of Sri Guru Nanak Dev Ji, the revered first Sikh Guru. Nearly 400 prominent people from different sectors of British and British-Asian community were present to listen to Mr Puri, a diplomat turned politician, speak on the subject of ‘The Contemporary Relevance of Sri Guru Nanak Dev ji’s Message of Inter-faith Harmony‟.

In his key note address, lasting a little over half an hour, the Hon‟ble Indian Minister spoke eloquently about Guru Nanak’s powerful and eternal message to the world, and its relevance in the 21st Century.

Drawing upon the tenets of the Sikh religion, he exhorted the three principles of Naam Japo (meditation), Kirat Karo (honest living) and Vand Chakho (sharing with others), which are inspiring the followers of Guru Nanak even today.

Mr Puri emphasised that Guru Nanak during his travels all around the world, over a period of 27 years, interacted with people of all faith, with commoners, with Kings, with philosophers, and seers, and built inter-faith harmony through dialogue.

“Long before the launch of the inter-faith movement, Guru Nanak had shared his ideas on building inter-faith understanding and harmony, almost five centuries ago. In today’s world, facing conflict and religious bigotry, the essential teaching of Guru Nanak can help build peace and harmony around the world.

“As the world addresses the challenge of terrorism, we don’t have the luxury to ignore this message of Guru Nanak, which can help each of us become a better human being and make the world a more peaceful place for everyone.”

The University of Birmingham is most suitable for the Chair given the strength of its academic offering, its close connections to the vibrant Sikh community, the larger British-Indian community of the UK, and its history and continuing commitment to India

The Hon‟ble Minister announced amidst thunderous applause, the launch of the prestigious academic Chair to promote research into the life and philosophy of Sri Guru Nanak Dev Ji, the revered first Sikh Guru. He said on the occasion “The University of Birmingham is most suitable for the Chair given the strength of its academic offering, its close connections to the vibrant Sikh community, the larger British-Indian community of the UK, and its history and continuing commitment to India.

“Equally, the City of Birmingham, in the heart of the United Kingdom, with its rich and diverse religious heritage, and its diverse population, is an ideal place for the Chair to be located,” he added.

In a star studded setting- the hallowed precinct of University of Birmingham turned into a veritable ‘who‟s who gathering’ for the evening. The evening’s proceedings began with a melodious musical performance organised by the Birmingham based South Asian Arts & Heritage institution- SAMPAD. The artist, Priti Kaur, gave an uplifting, solemn and seamless rendition of a Sanskrit Shloka, a hymn from Guru Granth Sahib and sang “Ae Watan, Mere Watan Abad Rahe Tu, Main Jahan Rahoon, Jahaan Mein Yaad Rahe Tu.”

Addressing the guests, Professor Robin Mason, Pro Vice Chancellor (International) said that he was delighted to welcome the Hon‟ble Minister to deliver the Annual Distinguished Guest Lecture which would strengthen the already existing strong linkage between the University and India. He also remarked that the University of Birmingham was the first British University to start academic course in Sikh studies, and was very proud of its engagement with the British-Indian community.

University of Birmingham Chancellor Lord Bilimoria of Chelsea said: “The Indian Government’s decision that the University of Birmingham should host this high-profile Chair is testament to our long-standing and ever-deepening relationship with India and its people. We are proud of our education and research links with India, particularly in those fields that resonate with the teachings of Sri Guru Nanak Dev Ji. We believe this Chair will help further deepen and strengthen links between our academic community and the Indian Diaspora.”

In her closing address the High Commissioner for India in the UK, Mrs Ruchi Ghanashyam congratulated the British-Indian community for its partnership on various projects to celebrate the auspicious occasion of 550th birth anniversary of Sri Guru Nanak Dev Ji, whose life and teachings inspire Indians belonging to all faiths across the globe. This is a great opportunity for that eternal message of the revered first Sikh Guru to be shared with the British community, and the larger world community.

The programme concluded with the presentation of a souvenir – a large original oil painting by renowned artist Mr. Sukhprit Singh from India. The artwork was especially commissioned by the High Commission of India, London for the occasion and was presented to the Hon‟ble Minister as a token of appreciation from the British-Indian Community of the United Kingdom.

Dr Aman Puri, Consul General of India, Birmingham said: I am delighted that the University of Birmingham has partnered on this prestigious academic Chair, as its India Institute is playing such an important role in improving collaboration between India and the UK. Future research by this Chair will help further understand the contemporary relevance of Sri Guru Nanak Dev Ji‟s teachings.”