With next to impossible for the British Prime Minister to be able to stick to his Halloween deadline for Brexit, Boris Johnson will now push for a general election if the EU proposes to delay exit of the UK from the European Union until January, No 10 Downing Street has indicated.

Johnson “paused” his Brexit bill on Tuesday after MPs rejected his plan to get it signed off in three days.
Now it is for the EU leaders to consider whether to grant a delay to the October 31 deadline and if yes, then what extent, the BBC reported.

A letter Johnson was forced by law to send to the bloc after failing to secure backing for his deal on October 19 called for a three-month extension. But a Downing Street source suggested Johnson would not accept such a lengthy extension.

“On Saturday, Parliament asked for a delay until January and today Parliament blew its last chance,” the BBC quoted source as saying. “If Parliament’s delay is agreed by Brussels, then the only way the country can move on is with an election. This Parliament is broken.” 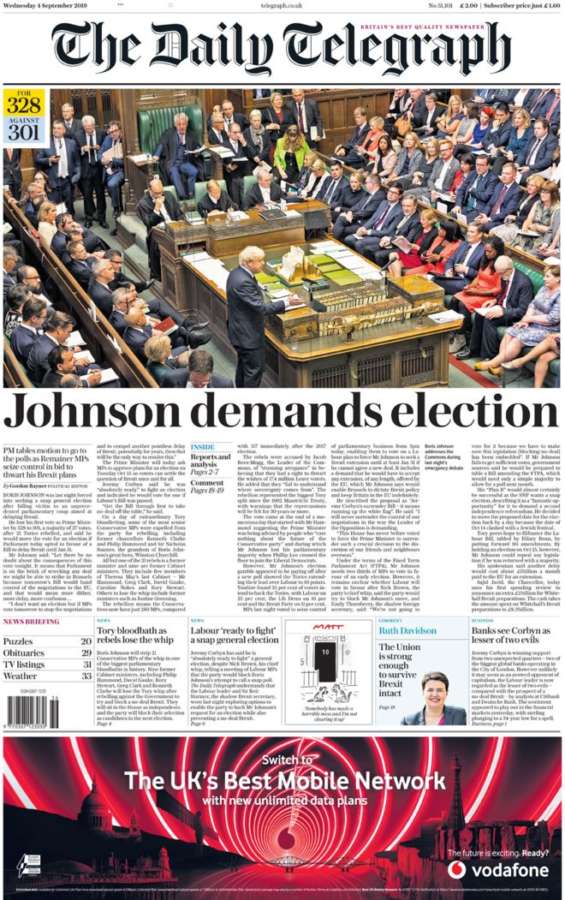 On Tuesday, MPs approved the Prime Minister’s Withdrawal Agreement Bill on its first hurdle through the Commons — called the second reading — by 329 votes to 299. However, minutes later Johnson was defeated — by a majority of 14 — in a second vote on a fast-tracked timetable for the bill, prompting him to pause his legislation.

He insisted to MPs it was still his policy that the UK should leave the EU on Halloween, but acknowledged he would have wait to hear what EU leaders said.

However, Leader of the Commons Jacob Rees-Mogg said it was “very hard to see how it is possible” for the bill to pass through the Commons and the Lords before October 31, adding that Brexit was now in “purgatory”.

Following the vote, EU Council President Donald Tusk said he would recommend European leaders backed an extension to the Brexit deadline, though he did not say what length it should be.

The BBC report said most of the people in EU circles were tempted to grant the extension to January 31 laid out in the so-called Benn Act — the law aimed at preventing no-deal.

The same law under which Johnson wrote to the EU to ask for a three-month extension on October 19, but did not sign the letter and said it was Parliament and not the government that had requested the delay.

Quoting EU source, the BBC report further said that the bloc has indicated it was also considering a “flextension” — an extension with a maximum end date, but with the flexibility for the UK to leave early if a deal was ratified sooner.