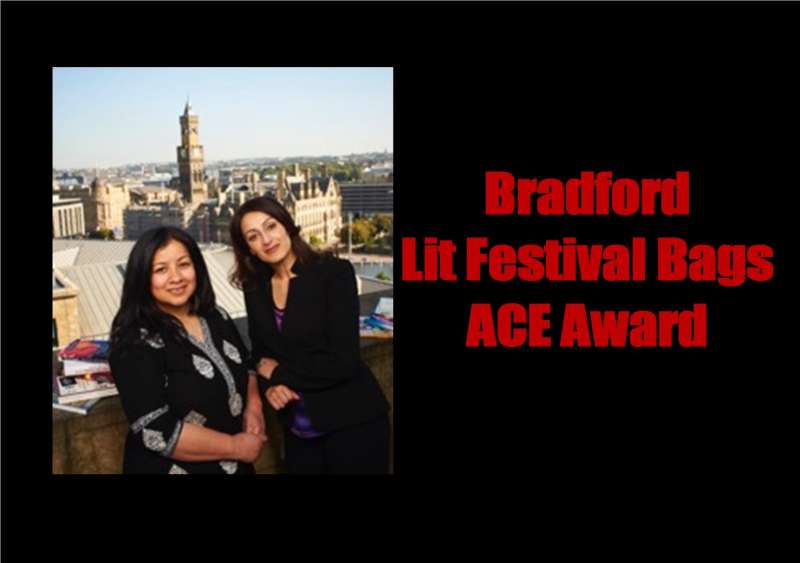 The Bradford Literature Festival has bagged funding from Arts Council England (ACE) for the 2016 and 2017 festivals. ACE has supported the festival since its launch in September 2014. The award follows last year’s announcement of title sponsorship funding from Provident Financial. This, coupled with continued support from Bradford Council, University of Bradford and the Midland Hotel, gives the festival a strong base on which to build for the future and create an internationally renowned destination festival in Bradford, the literature hub of the North.

The funding of £495,000 has been awarded under the Ambition for Excellence scheme, unveiled by the Arts Council last year. Given the award is focused on supporting talent, excellence and growing an ambitious international-facing arts infrastructure, this is a major accolade for the festival. It will help develop the cultural infrastructure in Bradford and the North of England, leading to a step change for both literature and literacy.

The Festival is curated by Culture Squared, a community interest company set up by Syima Aslam and Irna Qureshi, specifically to create high quality cultural events to advance understanding and cohesion between different communities in Bradford and beyond, and to improve the engagement of new and diverse audiences with different forms of cultural activity.

The Bradford Literature Festival, in association with Provident Financial, was launched in September 2014 and held its first full festival in May last year, attracting nearly 9,500 people to over 150 events. The 10-day festival saw Bradford play host to local, national and international figures from the worlds of literature, politics, arts, science, faith, culture and film, coming together to debate issues and ideas which ranged from poetry to particle physics. The festival is spearheading Bradford’s cultural renaissance to complement the ongoing economic regeneration and is committed to raising aspirations and literacy levels in the city.

Building on last year’s success, the 2016 festival will run from Friday 20th to Sunday 29th May. As well as bringing together leading writers, thinkers and artists to create thought provoking and uplifting events, the festival will introduce international elements from Bronte and Japanese collaborations, to the introduction of artists from Pakistan and Turkey into the Sufi weekend.

Syima Aslam, Festival Co-Director, said: “We are delighted that the Arts Council have demonstrated their confidence in the festival and in Bradford by awarding this significant funding. Following as it does on the title sponsorship deal with Provident Financial last year, as well as the continued support from Bradford Council, the University of Bradford and Midland Hotel, this excellent news puts us in a strong position to create an international destination festival. This will not only create a step change for the cultural infrastructure of Bradford and the north, it also has a significant impact on the economic regeneration of the city.”

Irna Qureshi, Festival Co-director said: “Bradford Literature Festival is unique in that it responds to a local and national need for cultural spaces where all experiences are equally valid, and shared on platforms that are accessible to everyone, rather than one particular part of the population. The festival has successfully reached audiences that traditional literature festivals simply do not, by creating a programme that cuts across communities, cultures and contemporary Britain’s multiple identities. As such, it is relevant not only to Bradford’s many different communities but also nationally. It’s taken Bradford with its unique backdrop to re-write the cultural narrative and create a cultural shift, that marks a coming of age not just for this city but also for the UK.

Kersten England, Chief Executive of Bradford Council said: “This is great news for the Literature Festival and for Bradford. In 2015, the festival demonstrated its ability to reach new and diverse audiences. In awarding this funding, Arts Council England have recognised the ambition and quality of our future plans. We are glad they want to be part of what we are doing.”

Councillor Susan Hinchcliffe, Portfolio Holder – Education, Skills & Culture at Bradford Council said: “I’m delighted that Bradford Literature Festival has been successful in this major Arts Council England application. The first full programme for the festival last year demonstrated the quality and range of writers and opinion formers the festival organisers are able to bring together.  Bradford Literature Festival is a great addition to the cultural calendar in Bradford and has brought us positive national and international attention.  They have a great future in the city and I’m pleased that the Arts Council have recognised this with this funding award.”

Alison Clark, Director Combined Arts & North, and Programme lead for Ambition for Excellence at the Arts Council said: ‘We are very pleased to support such an exciting internationally focused programme in Bradford and to back the vision that plays to the city’s strengths, while working with the best writers in the world and nurturing new talent.’

Peter Crook, Chief Executive, Provident Financial Group said: “Provident Financial is thrilled at the news of Arts Council England’s generous support of the Bradford Literature Festival. Bradford is home to many diverse cultures and the festival is unique in its ability to reach across these cultures and bring communities together. It is also good news for Bradford, a city currently undergoing significant regeneration. This extra funding will allow even more people from Bradford, the rest of the UK, and from abroad to attend this exhilarating festival.”

The next Bradford Literature Festival will feature 200 events across 10-days from Friday 20th  to Sunday 29th of May, 2016 – More details 0n www.bradfordliteraturefestival.co.uk

This shows that arts organisations in Bradford are producing real quality cultural experiences and attracting Arts Council funding as a result. As a resident of Bradford for many years, I still want to see Bradford achieve an even higher share of funding. Well done to everyone who took part.