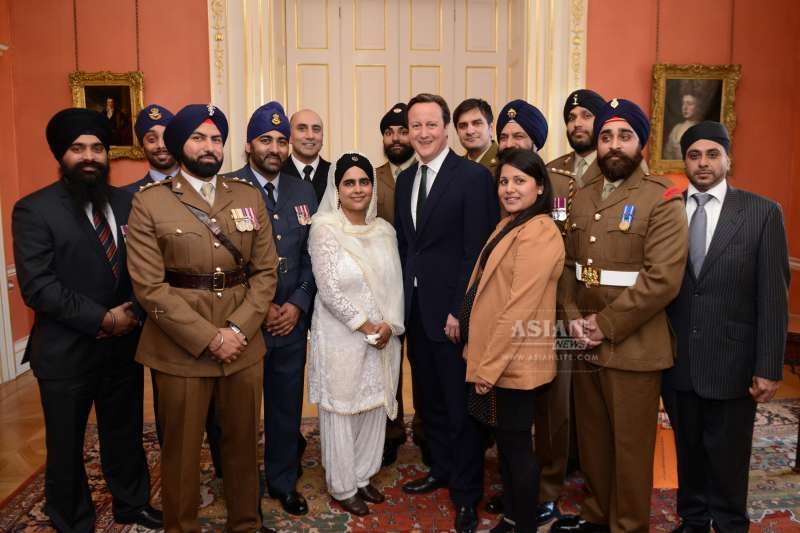 The prime minister joined thousands of people in a parade which carried a holy book to the temple.

“I wanted to make sure Downing Street was part of this too, and I’m proud to be the first Prime Minister to host a Vaisakhi reception at Number 10,” he said. “And I’ll tell you what – if I’m back there as Prime Minister, I’ll keep bringing the community, the colour and the celebrations there, again and again.

“And I’m sure my children will carry on stealing the jalebi  too!”

The Sikh community is poised to play a key role in the 7 May general election, as polls suggest they are the religious community that is most likely to participate in elections. 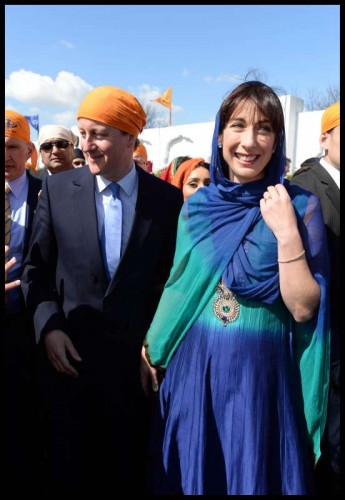 An estimated 420,000 Sikhs live in the UK. Although ethnic minorities have mostly voted Labour in the past, there are suggestions that members of the Sikh community may vote Tory.

Cameron and Samantha, who was celebrating her 44th birthday, joined the nagar kirtan procession before being given a tour of the gurdwara. Adam Holloway and Priti Patel were also at the celebrations.

Speaking during his visit, the Prime Minister said: “Thank you everyone for organising such a wonderful parade. Thank you to the president of the temple, Davinder Singh Bains, for welcoming Samantha and me in such a generous way today. And to everyone here: “Waheguru Ji Ka Khalsa; Waheguru Ji Ki Fateh”

“I am the first serving British Prime Minister to have visited the Golden Temple – and that makes me so proud. The visit was intense and it was fascinating. I will never forget the tranquillity of that beautiful, peaceful place or meeting the worshippers who could call this remarkable temple their own. And I will never forget laying a wreath at the Amritsar Memorial. It was a deeply sobering moment. What I saw at the Golden Temple, I see amongst British Sikhs day in, day out: Your devotion to God. Just how hard you work. And the thing that is the centre of everything you do: community. Those come back to the three pillars of Sikhism – and I’d like to say a word on each.

“First, Naam Japna – devotion to God. And there couldn’t be a bigger, bolder, more vibrant sign of your devotion than this festival. I think of the Vaisakhi celebrations taking place around the world this week:

“The hordes of worshipers flocking to the Golden Temple the pilgrims pouring into the Panja Sahib shrine in Pakistan the parades from Vancouver to Melbourne, from Kuala Lumpur to Birmingham those are the big global celebrations – and this here in Gravesend is one of them.

“I wanted to make sure Downing Street was part of this too and I’m proud to be the first Prime Minister to host a Vaisakhi reception at Number 10. And I’ll tell you what – if I’m back there as Prime Minister, I’ll keep bringing the community, the colour and the celebrations back to Downing Street, again and again. And I’m sure my children will carry on stealing the jalebi too!

“The second pillar is Kirat Karni – work. British Sikhs are a shining example of a strong work ethic. You can see it in our hospitals, at our schools, in businesses up and down our country. Hard work runs through your veins – and the combination of hard work, courage, service and loyalty runs through your history too.

“We are currently marking the centenary of the First World War. It was a time when so many brave men and boys made their way from their homes in India to the battlefields of unknown lands. We’ve all seen the photographs of them on the frontline, with their turbans and kirpans. And from Delhi to Ypres, we’ve seen their memorials too.
“ 1915 was a year when so many of them fought and fell, at the Battle of Neuve Chapelle. And in 2015, let this be our pledge: to remember them. Because their legacy is our liberty – and we must never, ever forget that.
“ The third pillar is Vand Chakna – community. I look back over the last 5 years and I think: who was there in the storms, helping people flooded out of their homes? t was British Sikhs.

“Who was there in the riots, protecting not just gurdwaras, but Hindu temples and mosques too? It was British Sikhs. And who has been there day in, day out offering langar to those in need?

“It’s British Sikhs in British Gurwaras, like here at the Guru Nanak Darbar Gurdwara like Gurdwara Sahib Leamington, where I was just weeks ago. Every single day, British Sikhs help make Britain great. And you prove one thing: Our country isn’t just red, white and blue – it’s orange too. And we support you in your devotion, in your work, in your commitment to your community. We support you every step of the way.

“Remember: we’re the ones that banned the turban searches at airports and that said Sikhs could wear turbans at work. We’re the ones with Paul Uppal, the only serving Sikh MP, and with Ranbir Suri in the House of Lords too.
And in 19 days I’m hoping that Paul will no longer be the only one on the Commons benches because from Samir Jassal in East Ham to Suria Photay in Wolverhampton, we’ve got some great Sikh candidates, candidates who represent the very best of British. So from Samantha and me: thank you. Thank you for having us.
Thank you for what you do for this country. And let me wish you all a happy and healthy Vaisakhi.