British Lord of Pakistani-origin Lord Nazir Ahmed shared dais with leaders of the banned Sikh For Justice in London. Asian Lite obtained a video showing the Lord addressing a press conference with Sikhs For Justice (SFJ) President Gurpatwant Pannun and other leaders.

The India government on July 10 declared SFJ as an unlawful association under the Unlawful Activities (Prevention) Act, 1967. The decision was taken at a Union Cabinet meeting chaired by Prime Minister Narendra Modi. The official move against the Sikh radical forum will make Britain to take action against SFJ activities in the UK. SFJ organised a rally at Trafalgar Square in 2018 to promote their 2020 referendum campaign.

The fringe group is run by a few radical Sikhs with foreign nationalities in the US, Canada and the UK. SFJ regularly associated with other diaspora-based pro-Khalistan elements, Kashmiri separatists and pro-Pakistan groups to carry out anti-India activities in countries like the US, the UK, Canada, Germany, and Australia. India is investigating 11 criminal cases against the group and its leadership on various charges. They were part of the group attacked India House during the protests in London on August 15 and September 3.

Lord Nazir, who is on bail in a historic sexual attack case, is facing the trial on Dec. 2 at Shefffield court and he is denying the charges.  In the video, the Lord was praising the 2020 Campaign of the banned organisation and offering assistance. The Lord is also condemning India’s “unilateral” decision to abrogate the special status for Kashmir.

In the same video, the Lord was also offering support for the creation of Khalistan. The Lord is assuring support from the British parliamentarians to the separatist campaign. He is also promising to take the campaign to international forums like UN and EU.  He is urging the separatists to use “Masjids” and “Gurudwaras” besides community leaders to enrole more people to join the protest against India on August 15.

The protest become violent and the protesters used smoke bombs, eggs, tomatoes and bottles to smash the historic building at Aldwych. They also attacked the Indians gathered near India House to celebrate Independence Day. The police and the London mayor were accused of ignoring the requests to provide protection to India House and Indian celebrating Independence Day.

The British Lord’s anti-India campaign along with SFJ president Gurpatwant Pannun, a New York-based attorney, angered the community. The other leader Paramjit Singh Pamma is a wanted terrorist in India.

Meanwhile, the India government has issued public notices through prominent newspapers in the UK to ask Sikh For Justice office bearers to appear in court in Delhi on September 20, 2019 regarding the government decision to ban the organisation on 10th July, 2019.

A copy of the letter was also delivered to an address at Canary Wharf. Asian Lite enquiries revealed that the address belongs to Regus business centre. Regus officials said the banned organisation used their premises for just two months last year. 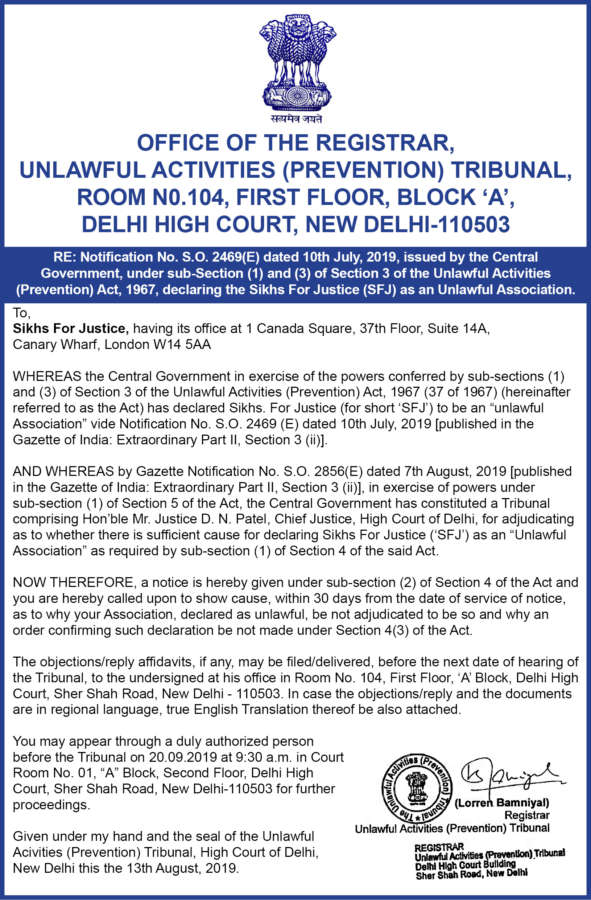