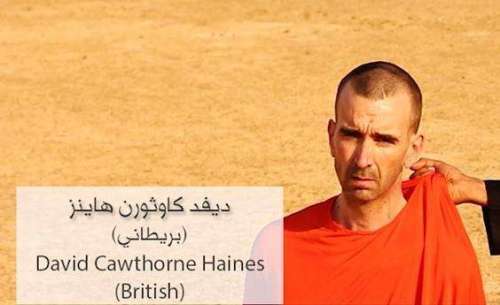 In a heartfelt response to the murder of humanitarian David Haines, British Muslims across the UK are being called upon to come together in a national day of prayer for all humanitarians on Friday 19 September – facilitated by Imamsonline

The letter is expected to see a significant turn out of Muslims attending mosques across the UK on Friday to take part in a special extension of Juma’ah – the weekly Friday prayers.

More than 15 major mosques around the UK have already called on their congregations to take part and is expected to see an unprecedented number of British Muslims joined together in prayer calling for the safety and security of all humanitarians regardless of creed or colour.

Families will stand side by side, mothers, fathers, sons and daughters, united with one voice speaking out against the acts of terror perpetrated by ISIS and in support of the families of British murder victim

In a sign of increasing coordination and purpose, leading UK Imams from across denominations, have signed an open letter declaring their support for such an initiative.

It has been facilitated by Imamsonline which recently supported another open letter signed by more than 100 Imams which urged the British Muslim communities not to fall prey to any form of sectarian divisions or social discord.

The call for support has been sent to more than 1,700 mosques and Imams across the UK to garner support for the Day of Prayer on Fridayand includes a declaration against ISIS as well as a message of support for the Haines and Henning families:

“We stand united in our condemnation of the barbaric and abhorrent actions of these terrorists. We stand united in saying that this group [ISIS] have nothing to do with Islam, our peaceful and tolerant religion.

We ask you to join us in a national Day of Prayer on Friday, 19th September. Imams and congregations up and down the country come together at Juma’ah to pray for the Haines and Henning families, to condemn and reject ISIS’s false representation of Islam, and to show our solidarity with all who stand for peace, tolerance and love for humanity in this country.”

The call for The Day of Prayer comes as the outpouring of shock, disbelief and anger against ISIS reached new levels at the weekend when the video of David Haines’ murder and the threat to kill Alan Henning was released.

The unprecedented response by Britons, irrespective of religious beliefs or background, came as they reacted to an attack on one of our own.

Qari Asim from Leeds representing Makka Masjid, said: “As a nation we must come together in our grief, condemning the actions of the terrorists ISIS. The cowardly murder of David Haines; a father, husband, and friend to humanity, has devastated the country. I call on all British Muslims to join together in our response through prayer and messages of support for all humanitarians to show a unified Britain against the cowards ISIS.”

Sheikh Sayed Ali Razawi from London representing Majlis Ulama-e-Shia, said: “I condemn the actions of ISIS on a human level, as a Briton and Muslim and urge others to stand together in rejection of this crime. It is important for voices to be heard on Friday in support of all humanitarians on the National Day of Prayer.

“Our thoughts and prayers are with David’s family and loved ones as well as his local community who have been affected by this heinous crime. We pray that the same fate does not befall Alan Henning, another humanitarian, who is being used as a pawn by ISIS”

Shaukat Warriach, Chief Editor of Imamsonline said: “The vile and unwarranted attack on British citizen and humanitarian David Haines will not divide our cmmunities but instead continue to unite us against the terrorists ISIS.

The National Day of Prayer is a symbol of our strength and our love and I call upon all British Muslims to show their support by getting involved and standing united.”

On Sunday a number of voices from Imams and community leaders across the UK were brought together in a new film hosted by Imamsonline.com, as the communities continue in the digital fight back against the hate-filled propaganda disseminated by ISIS.