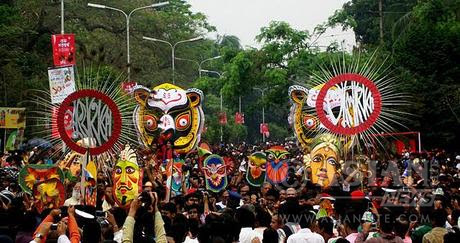 Millions of Sikhs around the world will celebrate the centuries-old festival of Vaisakhi this week, one of the most important dates in the Sikh calendar. UK being the hub of multiculturalism will see several processions and celebrations taking place this weekend in reverence of Vaisakhi (14th April), the Malayalee New Year Vishu (14th April) and Pohela Boisakh , celebrated by the Bangladeshi community. 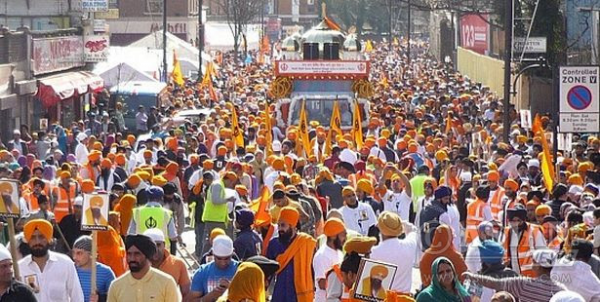 The Mayor of London hosted the annual Vaisakhi event at City Hall, celebrating the culture and heritage of Sikhism with folk dances, music and food. The event was on Saturday, 09 April from 1-6 PM.
In addition to this, thousands of Sikhs in Southall held a religious procession as part of the annual event which has been held for the last 40 years in UK from the Park Avenue Gurdwara through the streets of the surrounding area in celebration of Vaisakhi. They gave away free food to all and singing hymns, with displays of martial-arts. The procession was held on Sunday, 10 April from 11 AM to 4 PM and will take place from Havelock Road Gurdwara to Park Avenue Gurdwara.

Meanwhile, Birmingham’s sizeable Sikh community celebrates Vaisakhi in a park, as there is a big party in the city each year to mark the religious festival. Organisers say more than 100,000 people are expected to attend the Vaisakhi in the Handsworth Park event on Sunday, 26 April, from 11AM to 6.30 PM.  Vaisakhi celebration at the Southampton Vaisakhi Procession will begin with raising the Nishan Sahib (Sikh National flag) at the Civic Centre on 17th April from 1PM from the Gurdwara Guru Tegh Bahadur Sahib.

April 14 is the first day of the festival of harvest where the Bangladeshi community will come together to celebrate Pohela Boisakh. In order to celebrate the Bengali festival, there are various events taking place in London. The annual Boisakhi Mela 2016 in London will be held in London Brick Lane on 22nd May and will have a multitude of food stalls, rickshaw rides and colourful floats to welcome the Bengali New Year. London Brick Lane will be home to the celebrations with conventional costumes, Bengal tigers and ethnic rituals can be abundant.

The Malayalee New year celebrated in the southernmost state of Kerala in India is also celebrated amongst the Kerala community with much fanfare and glory. People will have special feast—vishu sadya—on the day and will see the auspicious `Vishukani’. The Woking Malayalee Association and the Hayward Heath Friends Family Club joined up their vishu celebrations with Easter and had an eventful week of music, drama and dance last weekend.