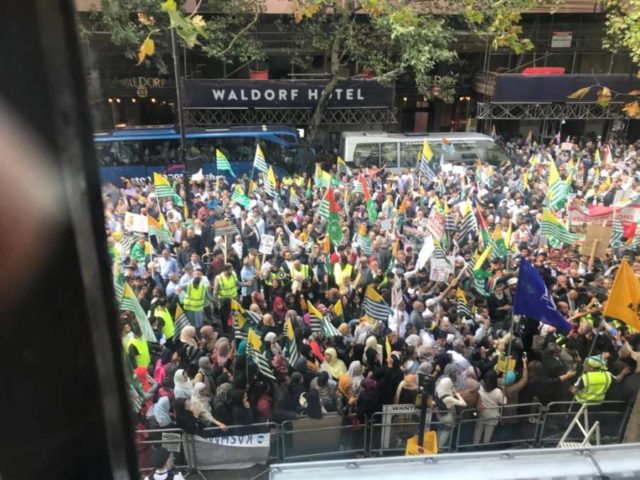 The High Commissioner of India to UK Mrs Ruchi Ghanashyam is leading a cleaning mission today (Saturday 7th Sept) at 11 pm with the support of the community to clear the mess created by the Pakistani protesters…. reports Kaliph Anaz

Celebrity Londoner Katie Hopkins condemns the attack on India House at London by Pakistani protesters on September 3. India House, headquarter of Indian mission in the UK, located at a busy spot in Aldwych, is a Grade II listed building.

The High Commissioner of India to UK Mrs Ruchi Ghanashyam is leading a cleaning mission today at 11 pm with the support of the community to clear the mess created by the Pakistani protesters. Despite repeated requests, the Metropolitan Police failed to provide adequate security to the Indian mission and its staff. There are just two arrests and the police refused to disclose the charges or the status of the arrested protesters.

The Pakistani protesters arrive in sponsored coaches from all over England with stones, smoke bombs, bottles, eggs and tomatoes for a PEACEFUL PROTEST. The metropolitan police failed to act when protesters smashed antique window pans.

India House is one among the historic building in the location. Others in the row are Bush House, Marconi House, Australia House, London School of Economics and King’s College London.

Proposed in 1925 by the Indian High Commissioner Sir Atul Chatterjee, the building was designed by Sir Herbert Baker and completed in 1930. It was formally inaugurated on 8 July 1930 by the King-Emperor George V.

Metropolitan Police and London Mayor Sadiq Khan draw flak for their failure to protect India House from Pakistan sponsored protesters in London. They were accused of hiding behind the outdated right to protest rules to justify their action.

Most of the major protesters are now taking place at Trafalgar Square. Recently the Square witnessed a major protest against the Communist state’s intervention in Hong Kong.

Hundreds of Pakistanis arrived in central London in sponsored coaches on a working day to stage a major protest against India’s decision on Kashmir. The protest was called by the Jammu & Kashmir Liberation Front (JKLF) and was supported by all Kashmiri and Pakistani groups in Britain, including the British chapters of the Pakistan Tehreek-e-Insaf (PTI), Pakistan Muslim League-Nawaz (PML-N), Pakistan People’s Party (PPP), and the Jamaat-e-Islami Pakistan (JI).