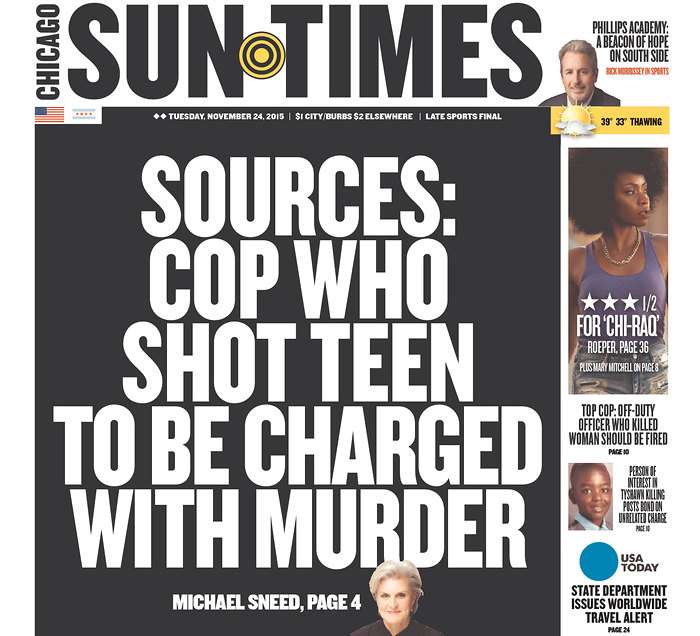 Ahead of the video’s release late Tuesday on the orders of a judge, the white police officer Jason Van Dyke who shot black teenager Laquan McDonald on October 20, 2014 was charged with first-degree murder. He is being held without bond.

A group of protesters began marching, chanting “16 shots” and “We got to fight back!” soon after the video’s release as Chicago braced.

The nearly seven-minute video shows the dash-cam view as a patrol car approaches the scene. About five minutes and 20 seconds in, McDonald is seen running, then walking down a road toward several squad cars with flashing lights.

With his left hand near his pocket, McDonald veers away from two police officers, who have their guns drawn.

Seconds later, McDonald appears to spin around, then falls, writhing as shots keep hitting his body, sending puffs of smoke into the air.

One Twitter user compared McDonald’s death to that of Walter Scott, a black man in South Carolina who was killed by an officer after being pulled over, reportedly for a broken brake light, and later struck in the back as he was running away from police.

Cook County State’s Attorney Anita Alvarez announced charges against Van Dyke, who turned himself in to authorities Tuesday, happened one day before the city’s deadline to release video that shows the shooting.

Until last week, officials had resisted such a release, fearing it could jeopardise investigations, CNN reported.

Others said it could spur major protests in reaction to footage that even Van Dyke’s attorney admits is “graphic, disturbing and difficult to watch.”

Alvarez said the deadline moved up the timing of her announcement but did not dictate her decision to charge the officer with first-degree murder. She also defended the time it took her office to investigate by saying the case is complicated.

Authorities say McDonald was armed with a 3-inch knife when Van Dyke confronted him. The teen did not comply with “numerous police orders to drop the knife,” the officer’s attorney, Daniel Herbert, told the Chicago Tribune.