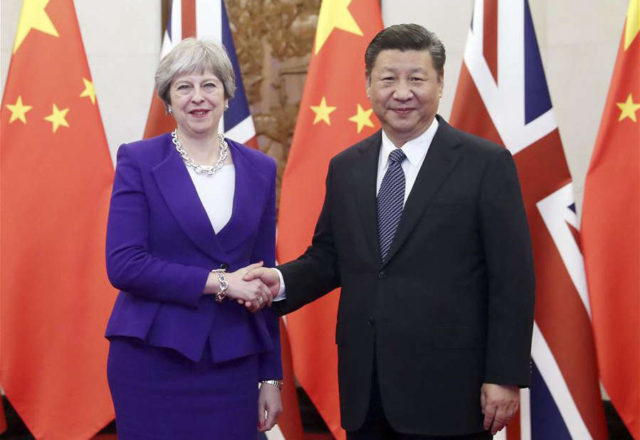 During their meeting at the Diaoyutai State Guesthouse, Xi said peace, development and win-win cooperation have become the mainstream of the times.

The two countries need to conform to the trend of the times, respond to the needs of their respective development stage and bilateral cooperation as well as add new meaning into the bilateral ties so as to forge an enhanced version of the “Golden Era,” Xi told May.

China and Britain agreed to embrace a “Golden Era” for bilateral relations during Xi’s visit to London in October 2015.

May hailed improved trading links between the two nations and said: “I’m very pleased with the people-to-people links we have been able to build on in education and in culture too.”

Xi made four proposals during the meeting. Firstly, the two countries should consider and design the future development of ties from a strategic height and in a comprehensive way.

Secondly, both sides should work together to promote economic and trade cooperation.

Thirdly, China and Britain should enhance exchange and cooperation within multilateral institutions such as the UN, G20 and the World Trade Organization to address global challenges.

Fourthly, the two countries should reinforce people-to-people and cultural exchanges.

The plan for joint action comes a month after a law banning ivory trade and its derivative products came into effect in China.

This is May’s first official visit to China since she took office in 2016. She kicked off her three-day visit to China in the central city of Wuhan on Wednesday and held an annual meeting between heads of government. Chinese Premier Li Keqiang was also present.

The two countries signed a dozen of deals in areas including trade, finance, healthcare and smart cities on Wednesday.

China Development Bank (CDB) will make available up to 10 billion yuan in the next five years to British Standard Chartered Bank to facilitate the projects under the initiative, according to a report.

Standard Chartered will use this to support loans to fund corporate finance projects and trade finance transactions along the Belt and Road, the press release said.

The banks signed the memorandum of understanding during the British Prime Minister’s visit who is accompanied by leaders of over 50 British business and commercial organizations.

CDB is China’s largest development bank. Last year, it set up a special lending scheme worth 250 billion yuan to support Belt and Road cooperation on infrastructure, industrial capacity and financing.

With a presence in 45 markets along the Belt and Road, Standard Chartered Bank announced in December a plan to spend at least $20 billion to finance projects under the Belt and Road Initiative by late 2020.

The initiative, proposed by China in 2013, aims to build trade and infrastructure networks connecting Asia with Europe and Africa based on ancient land and maritime trade routes.