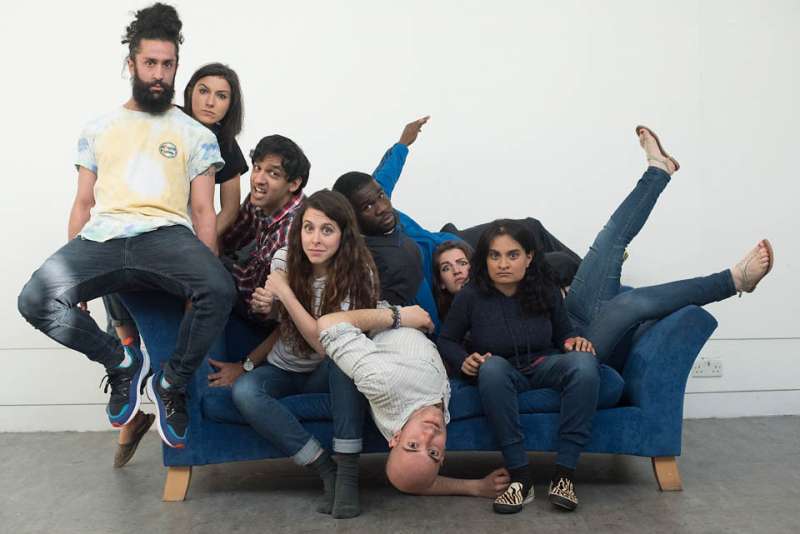 For its 10th anniversary, Muslim and Jewish theatre company, the MUJU Crew, presents a new comedy sketch show entitled Come In! Sit Down! aiming to counterpoint to the rise in Islamaphobia and Anti-Semitism. This is their first main stage co-production at their long-term home, the Tricycle Theatre….reports Asian Lite News

Filling the gap where hysteria and humanity meet, the MUJU Crew’s work has been a consistent, and counterpoint to the rise in Islamaphobia and Anti-Semitism.

Enter a world where terrorists are de-radicalised through yoga and Brent Cross has its own brand new security check-point. Confess your secret desires with our Imam-Rabbi rap duo, and take tea with Fatima and her four husbands. An evening of fun and laughter with your favourite jihadist, settler, and everything in between (including a few normal Muslims and Jews just trying to get on with life amidst chaos and crisis!).From unlikely sources genuine truths are exposed through sketches, hilarious songs and live music.

Andrea Tuijten, Creative Producer of MUJU said: “MUJU is about bringing Muslims, Jews and wider society together through creating theatre, comedy and new writing. It’s about being brave and honest in coming together to laugh, create, celebrate and explore the ‘elephants in the room’ together through comedy. Laughing allows you to breathe, tear-up, recognise and subvert stereotypical truths taken for granted and expose fresh perspectives.”

Indhu Rubasingham, Artistic Director of the Tricycle Theatre said: “MUJU began life at the Tricycle Theatre in 2004 as a youth theatre group. Ten years on it is stronger than ever, using humour and creativity to tackle important issues such as identity and youth culture and establishing artistic collaborations that bring communities together. We’re delighted the company is marking its tenth anniversary with this funny, bold and brave new show on our main stage.”

Ramzi DeHani is recent graduate from the Oxford School of Drama.  His credits include Black Sheep (Soho Theatre) and Anna Karenina(Royal Court).

Daniella Isaacs spent her teens playing the lead in ITV drama’s Night and Day. After training with the National Youth Theatre and Oxford School of Drama, she created and starred in the award-winning new play Mush and Me (Edinburgh Festival Fringe and Bush Theatre).

Dominic Garfield began his training with Chickenshed where he devised and performed in As the Mother of a Brown Boy, nominated for an Amnesty Freedom of Speech award. He continued his training at East 15, and, in 2013, co-wrote and directed Sandpits Avenue, winner of a Herald Angel Award at the Edinburgh Festival Fringe.

Lauren Silver trained as a clown with Philippe Gaulier and Spymonkey’s Aitor Basauri. As well as numerous regional theatre credits, Lauren has performed improv in London, Liverpool and Canada. She also works as a composer and musical director. In 2016, Lauren will be appearing in the feature film Wall by David Hare, produced by the National Theatre.

Salman Siddiqui has co-written, performed, directed and produced a number of shows for MUJU over the last ten years, including Extreme Prevention in 2010 that toured the UK. He has recently co-created a sketch show pilot for BBC Radio 4.

Josh Azouz is a writer and a director. His writing credits include The Mikvah Project (Yard Theatre); The Bike (Royal Court/Pimlico Playground.)  In 2014, Josh completed the Royal Court Writers Programme. He is currently developing plays with the Bush Theatre and Theatre Royal Stratford East. Among his many theatre directing credits are The Man Who Almost Killed Himself (Edinburgh, BBC iplayer & ODEONS nationwide).

The MUJU Crew provides platforms for Muslim / Jewish creative collaboration. These platforms will include theatre productions, arts festivals, commissions and live events. MUJU began life as the Tricycle Muslim Jewish Youth Theatre Group in 2004. Supported by the Tricycle Theatre, the Pears Foundation and the One to One Children’s Fund the group’s main aim was to bring young Muslims and Jews together for weekly drama sessions to encourage creative exchange.

MUJU is the recipient of the first Mosaic Talent Interfaith Award, presented by HRH Prince Charles and currently partners with the Tricycle Theatre in North London and Rich Mix in East London.

Come In! Sit Down!