Conservative Friends of India under the leadership of Dr Rami Ranger, co-chairmen, launches a membership campaign to support the Conservative fold and improve Indo-UK relationship….reports Asian Lite News, the best newspaper for British-Indians

The Conservative Friends of India has organised an event at Parliament. Prominent member s from the British-Indian community, including business personalities and councillors attended the event.
In an interview with Asian Lite, Dr Ranger said he will devote more time to support new generation of British-Indians to be active in politics and other sectors.

(The membership for CFI is free and please click the link for more details: http://bit.ly/2Jvg4V2)

“My plans are to engage with the British Indian community to encourage them to become more publicly and politically spirited. They are no longer immigrants as they have been here for 40 and even 50 years,” Dr Ranger told Asian Lite in an exclusive interview. “Many are born here and as a result, their destinies are linked with Britain. They must shape their own future by becoming decision-makers rather than leaving it to others.”

“ My task will be to make my fellow British Indians aware of the Conservative values and how they are better off supporting the Party with our values. I will engage with the students, young individuals and entrepreneurs to join the Party and network with the likeminded people to become strong and politically astute.” 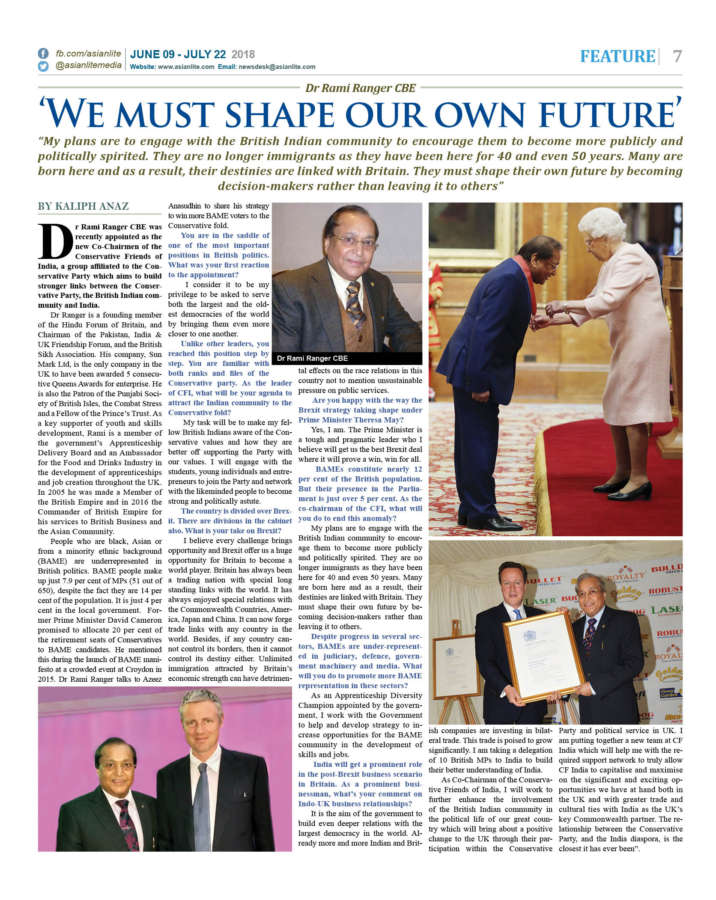 “As Co-Chairman of the Conservative Friends of India, I will work to further enhance the involvement of the British Indian community in the political life of our great country which will bring about a positive change to the UK through their participation within the Conservative Party and political service in UK. I am putting together a new team at CF India which will help me with the required support network to truly allow CF India to capitalise and maximise on the significant and exciting opportunities we have at hand both in the UK and with greater trade and cultural ties with India as the UK’s key Commonwealth partner. The relationship between the Conservative Party, and the India diaspora, is the closest it has ever been”.

Great to meet with the team of ⁦@wearecfindia⁩ our Co-Chairman, the charismatic ⁦@ZacGoldsmith⁩ MP at Parliament. Looking forward to working with ⁦@HCI_London⁩ pic.twitter.com/4xzxjlhVGK

Fantastic meeting with @ZacGoldsmith @RamiRanger and the rest of the newly formed @wearecfindia team. Delighted to have been appointed as Director of the Southern Region. Looking forward to engaging with the UK Indian Diaspora #Conservatives pic.twitter.com/MfervrHCJM