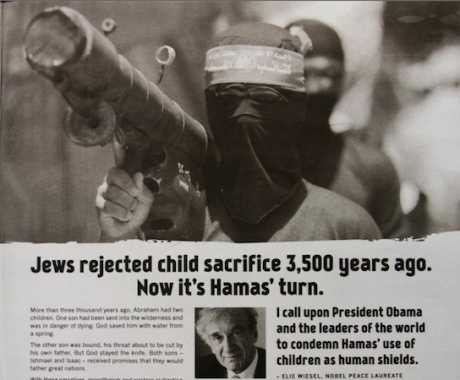 Two British newspaper giants have differed on carrying a controversial advertisement written jointly by Elie Wiesel, the Nobel prize-winning author, and Shmuley Boteach, an outspoken American-born Orthodox rabbi. This time it is Times which has raised a serious point, unlike its Left-leaning rival, saying that the opinion being expressed is too strong and too forcefully made and will cause concern amongst a significant number of Times readers. 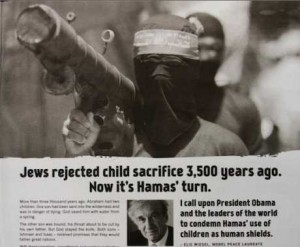 The advertisement asks President Obama and other political leaders across the world “to condemn Hamas use of children as human shields”, which amounts to “child sacrifice”.

The controversial advert refers to Abraham’s readiness to sacrifice his son on God’s orders and Hagar’s search for water in the desert. Both the events, incidentally, is also crucial to Muslim beliefs. Muslim will celebrate Eid-al-Adha after a month which commemorates Ibrahim’s (Abraham) willingness to sacrifice his son to God and marks last stretch of Haj Pilgrimmage.

The advert says that Jews rejected human sacrifice 3500 years ago, after God intervened to stop sacrifice of Abraham’s son, a belief shared by both Muslims and Jews, and tells Hamas it is its turn now.

The ad was paid for by an organisation called This World: The Values Network, which was founded by Boteach. Boteach responded angrily telling the Observer: “At a time when Israel is fighting for its very existence against the genocidal terrorists of Hamas, the British media, already infamously skewed against Israel, refuses a paid ad that every major American outlet… was proud to run as a full page ad.”

The Guardian defended its decision. The Observer quoted an unidentified source “with knowledge of the Values Network’s ad-buying practices” as saying: “The Guardian may be left wing but they obviously believe in free speech and allowing their readers to hear the voice of a Nobel laureate about a very important issue.”

But the Guardian also came under severe criticism in cyberspace. “This is liberal dishonesty. This is not defence of free speech. This is the ability of oppressors of people of Gaza to spread lies as they have money to pay for advertisement,” says Achuth Kailas, a law student at University of London.

The advertisement comes at a time when Israel is facing world-wide opposition for killing of unprotected women and children in troubled Gaza. Israel alleges that Hamas is using children as human shields.